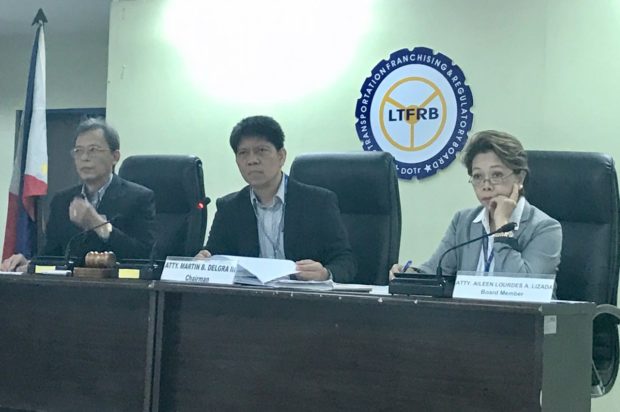 The Land Transportation Franchising Regulatory Board (LTFRB) on Wednesday reset what would have been its first hearing on the petition for a P-2 base fare increase of five jeepney groups, but not without the assurance to drivers and operators that their concerns were “valid.”

The LTFRB reset the hearing to October 24 after the petitioners failed to provide documents to substantiate their request for a fare hike.

“These issues are valid, the board affirms that these issues are there… But when you’re trying to ask for fare increase the riding public expects improvement. That’s what we want to hear from you next hearing,” LTFRB Chair Martin Delgra III said.

Fejodap’s Zenaida Maranan said they requested the fare increase due to the increase in the prices of spare parts and gasoline, and the continuous “kotong” of some cops in selected routes.

(Before we filed the petition, the drivers already told us that they were having a difficult time because they would only bring home P200 to their families from short routes, not including the bribes they would have to pay to the police at times.)

The transport agency’s board member Aileen Lizada slammed the illegal practice and asked Maranan to provide them with a list of routes where cops ask for bribes.

To which Maranan answered: “Dalang dala na kami kapag nalaman nila na tinuro sila, kami ang lagot (We are sick and tired that when we snitch them, they would go after us).”

Lizada also underscored that the jeepney sector remains to be the largest transport system throughout the country, saying that more or less 3.2 million Filipinos would be affected by the proposed fare increase.

Delgra said the agency had provided notices to the commuters group but they failed to attend Wednesday’s hearing. /idl