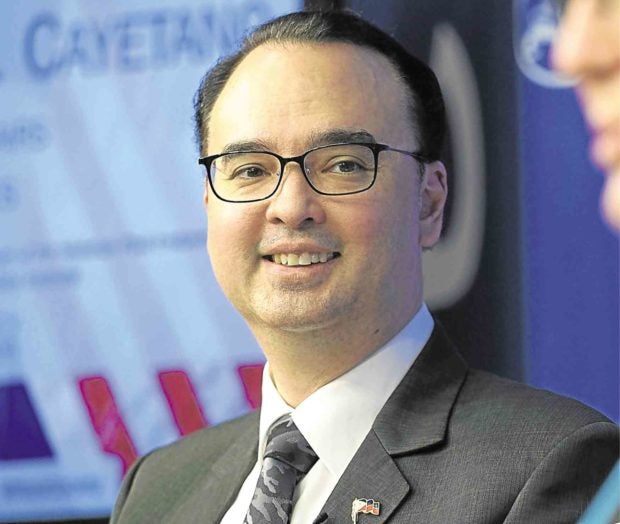 Every single one of the reported 3,850 people killed in police antidrug operations under the Duterte administration were drug dealers, Foreign Secretary Alan Peter Cayetano claimed in a media interview in the United States.

In a studio interview on the Al Jazeera program UpFront on Friday, Cayetano was challenged by the host, British journalist Mehdi Hasan, about the Philippine National Police report that 3,850 Filipinos had died in antidrug operations from July 1, 2016 to Sept. 16, 2017.

“So every single one of the three and a half thousand people who were killed was a drug dealer?” Hasan asked.

“Yes,” Cayetano replied, and was promptly rebuked by the host who said there had been no investigation nor charges filed proving the victims were drug dealers.

Pressed about due process for suspects, Cayetano said the police operatives were exercising self-defense, citing official accounts that the victims resisted arrest and fired at the officers first.

“You’re absolutely saying it as if you’re not on the ground. Come and look. If I pull a gun on you, here right now and you shoot me, it’s your fault or my fault?” Cayetano said.

He also said: “So you mean in the US or even in any country your show is shown, if someone pulls a gun on the police, they have to bring them to court first before they fire back? The police are doing what they can.”

Several deaths in the administration’s war on drugs, especially those of minors and young children, have been questioned and condemned. The death of 17-year-old  Grade 12 student Kian delos Santos during a police antidrug operation in Caloocan City in August sparked public outcry.

Police later said there was no official report implicating Delos Santos as a drug runner and that the conjecture was promoted by “social media.”

Cayetano also claimed that all the deaths in police antidrug operations were being investigated.

“Three and a half thousand. Every single one of them is being investigated … Independent investigators have seen progress,” he said.

The foreign secretary was again put on the defensive about the credibility of the PNP when Hasan quoted Mr. Duterte as saying he did not trust the police.

“President Duterte said: ‘You policemen are the most corrupt. You are corrupt to the core, it’s in your system.’ That doesn’t sound like rogue,” Hasan quoted Mr. Duterte as saying in January.

Cayetano said “hyperbole and figures of speech are allowed” in the President’s case.

“We’re not saying we should trust them. We said we should follow the law, which is presumption of regularity, but investigate,” he said.