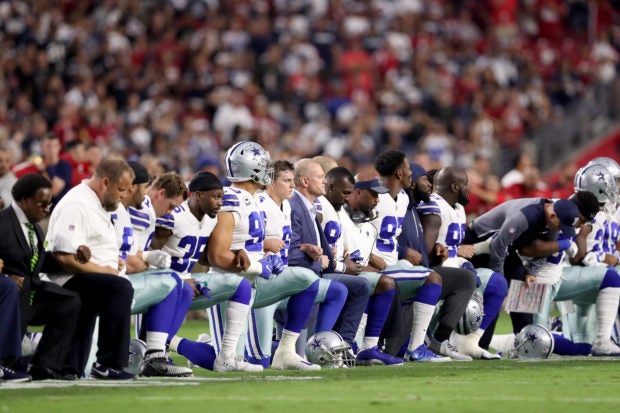 (FILE PHOTO) This file photo taken on September 24, 2017 shows members of the Dallas Cowboys as they link arms and kneel during the National Anthem before the start of the NFL game against the Arizona Cardinals at the University of Phoenix Stadium in Glendale, Arizona.
Americans largely disapprove of athletes staging protests during the national anthem but they also do not like President Donald Trump’s handling of the issue, according to two opinion polls published on September 29, 2017.Fifty-two percent of the people surveyed by CBS News said they disapprove of protests during The Star-Spangled Banner while 38 percent said they approve. AFP PHOTO / GETTY IMAGES NORTH AMERICA / Christian Petersen

WASHINGTON — Most Americans think refusing to stand for the national anthem is disrespectful to the country, the military and the American flag. But most also disapprove of President Donald Trump’s calling for NFL players to be fired for refusing to stand.

The NFL protests began last season with quarterback Colin Kaepernick, who knelt during the national anthem to bring more attention to the killings of black men by police officers. The protests spread this season, as the former San Francisco 49er was unable to sign on with another team, Seattle Seahawks defensive end Michael Bennett said he was racially profiled by Las Vegas police and then Trump sounded off.

According to a poll by The Associated Press-NORC Center for Public Affairs Research, 52 percent of Americans disapprove of professional athletes who have protested by refusing to stand during the national anthem, compared to 31 percent who approve.

At the same time, 55 percent of Americans disapprove of Trump’s call for firing players who refuse to stand, while 31 percent approve.

In the poll, African-Americans were far more likely to approve of the players’ protests.

“I don’t see kneeling while the anthem is being played as being disrespectful,” said Mary Taylor, 64, a retired law librarian from Olympia, Washington. “Somebody has to stand up. Right now, it’s black football players.”

Taylor, who is white, said she supports police but understands why players are protesting. And her personal politics also factor in.

“I’m for it because Donald Trump is against it,” she said.

The form of the protest seems to matter. The poll found Americans are more likely to approve than disapprove of players who, instead of kneeling, link arms in solidarity during the anthem, 45 percent to 29 percent.

“People don’t want to be confronted with their racism in any form. If they are confronted with it, they want it in the mildest form possible,” said DeRay Mckesson, a Black Lives Matter activist who has protested police actions since the 2014 killing of Michael Brown in Ferguson, Missouri.

The NFL protests got more attention and morphed into a bigger debate about patriotism after Trump told a crowd at an Alabama rally last month: “Wouldn’t you love to see one of these NFL owners, when somebody disrespects our flag, to say, ‘Get that son of a bitch off the field right now! Out! He’s fired. Fired!'”

That prompted dozens of NFL players, and a few team owners, to join in protests. They knelt, raised fists or locked arms in solidarity during pre-game ceremonies when the anthem was played.

Thomas Sleeper of Holden, Massachusetts, said he considers the protests to be freedom of expression protected by the First Amendment — and pre-game protests are likely the best stage for them because “individually protesting is not going to get as much press.”

“They want people to know that the country isn’t living up to its full standard,” said Sleeper, 78, who is white. “This is a way to get noticed, and possibly get some action taken.”

“We should keep politics out of our sports,” said Frank, who served in the Air Force. “We pay them to come out and play games and entertain us. Using this medium is not the right way to do it. Do it off the field. Let’s not interfere with the process of a good business and a fun sport.”

Just 4 in 10 Americans overall, and about half of African-Americans, think refusing to stand for the flag can be an act of patriotism.

Frank, an avid Arizona Cardinals fan who is white, said he plans to boycott watching football on Veterans’ Day to show his disgust with the players’ protest, part of a larger campaign being promoted on social media.

Thomas Peoples of New Brunswick, New Jersey, said the protests are a personal decision for each player. He doesn’t think their actions are meant to disrespect the country or the military.

Still, he would not participate in such a protest.

“It’s not my approach to resolve a problem,” said Peoples, 66, who is black. “I’m not a protester. But they’re expressing their feelings about how some Americans are treated in this country.”

The AP-NORC poll of 1,150 adults was conducted Sept. 28-Oct. 2 using a sample drawn from NORC’s probability-based AmeriSpeak panel, which is designed to be representative of the U.S. population. The margin of sampling error for all respondents is plus or minus 4.1 percentage points. The poll includes a total of 337 black respondents, who were sampled at a higher rate than their proportion of the population for purposes of analysis. The margin of sampling error among blacks is plus or minus 5.7 percentage points. For results reported among all adults, responses among blacks are weighted to reflect their proportion among all U.S. adults.