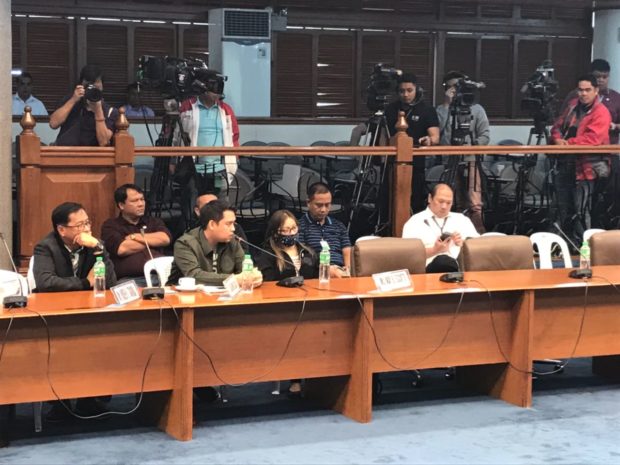 The Senate continues to hear the issues on “tara system” at the Bureau of Customs. INQUIRER.net / Jhoanna Ballaran

An alleged bagman of a Bureau of Customs (BOC) official bared on Wednesday during the Senate blue ribbon committee hearing that she received money from fixer Mark Taguba and delivered it to the chief collector of the agency’s intelligence department.

May Escoto alleged that she had brought money placed inside two brown envelopes from Taguba in three separate occasions upon the orders of Joel Pinawin of the Customs Intelligence and Investigation Services (CIIS).

The envelopes, Escoto said, were labeled “Sir Joel” and “Director,” which was supposedly for CIIS Director Neil Estrella.

When asked by Sen. Panfilo Lacson about how much the money worth, Escoto said she did not know.

“Hangga’t maaari nga po ayokong hawakan e.” Escoto said. (As much as possible I wouldn’t want to touch it.)

Escoto said Pinawin also asked to give him her sim card and just told him to buy a new one.

(I can’t take my sim card off immediately… He told me to use my earing to unplug the sim so I did because I was already in front of him. He hastily wanted to get the sim from me. Upon giving it to him he immediately gave me something to buy for a new sim.)

Pinawin vehemently denied the accusations and said he never asked Escoto to get any package from Taguba.

(Of all the things May said, all of which are lies. First of all, I did not give any orders to May and her husband. It is clear here that if they have their own communications it is just between them including their transactions your honor. It is personal between them.) /jpv

BOC officials: Yes, there is ‘tara system’ in Customs

Read Next
Suspects in killing of Puerto Galera councilor, son nabbed
EDITORS' PICK
Malls adjust ‘NCR Plus’ operating hours for April 12-30 MECQ
Speed up your game with the new vivo Y20s [G]
Pru Life UK receives four golden arrows for solid corporate governance
Metro Manila to have shortened curfew hours from 8 p.m. to 5 a.m. under MECQ
Pre-order the new vivo Y20s [G] to get a free TWS earphone
‘NCR Plus’ to be under MECQ starting April 12 until April 30 — Palace
MOST READ
Stop ‘creeping occupation’ of ‘militia’ boats in WPS, Pacquiao asks China
Bea Alonzo clarifies status of her relationship with Dominic Roque
Convicted former aide of Sen. Bong Revilla dies — BuCor
Locsin to China: ‘Then move out’
Don't miss out on the latest news and information.