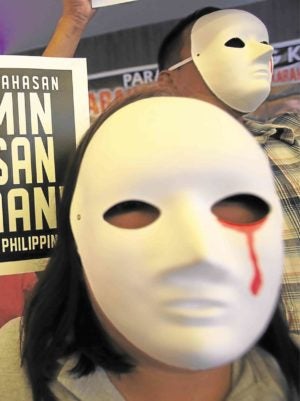 ANGELES CITY — Praying the Angelus offers a way to save the youth from falling victims to vices, crimes and extrajudicial killings, according to the Holy Angel University (HAU) as it distributed CDs and DVDs of the Angelus to Church leaders on Monday.

The Angelus commemorates the moment when the Virgin Mary embraced an angel’s pronouncement that she would become the Mother of God.

The Angelus revival project calls on young people, like in the rest of Roman Catholic communities and families, to gather and pray every 6 p.m.

“It also encourages our young people to stay out of the streets at night and come home by sunset, especially in these uncertain times when evil is waiting at every dark street and alley,” said Robby Tantingco, HAU vice president for student affairs and services.

The project meets the challenge made by Archbishop Florentino Lavarias to stand against the “seeming unabated extrajudicial killings and human trafficking.”

“These challenge our belief that God loves us so much,” Lavarias said in the homily he gave at a Mass held on the feast of the holy guardian angels on Monday. He urged students and teachers to care for the “last, lost, least and excluded.”

The project, initiated during a session of the Catholic Bishops’ Conference of the Philippines in January, promotes the value of families praying together.

It also helps preserve languages as the prayer is recited in 12 regional languages by bishops, including Bishop Pablo Virgilio David, head of the Diocese of Caloocan, an outspoken critic of extrajudicial killings especially among young people.

Also on Monday, HAU launched the biography of Felipe Sonsong, the first Kapampangan candidate for sainthood, and the blessing of an oratory containing more than 150 relics of saints and the beatified.

Sonsong, according to Tantingo, was a member of the Macabebe Soldiers in the 1600s, who helped Spain quell Filipino rebellion and insurrection. He underwent conversion, leaving his family and wealth, to join the Augustinians, Dominicans and the Jesuits.