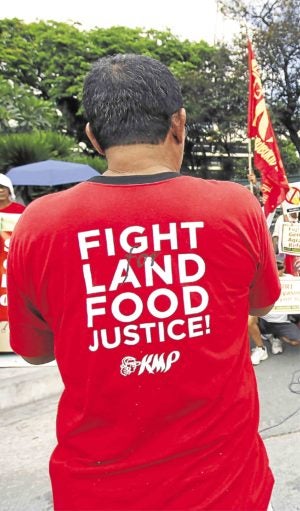 Peasant leaders, like this unidentified man at a rally in April near the agriculture department in Quezon City, are constant targets of harassment and assassinations. —EARVIN PERIAS

DAVAO CITY — A leftist labor and peasant organizer was shot dead in a town in Compostela Valley, becoming the 49th victim in southern Mindanao alone of suspected assassinations of leftist leaders linked to the counterinsurgency campaign under the administration of President Rodrigo Duterte.

Reneboy Magayano, 50, chair of Maragusan Workers’ Association, was shot dead while buying fish at a market in the village of Poblacion, Maragusan town, according to Cristina Palabay, secretary general of the human rights group Karapatan.

‘High regard for rights’

Escano said soldiers carry out counterinsurgency operations “with high regard and adherence to the respect of human rights.”

“The military is not involved in such inhumane acts,” Escano said. Human rights groups, he said, can file cases “with the assurance of our full cooperation.”

On Tuesday, Toto Lompaodan, a member of Alyansa sa Mag-uuma sa Sidlakang Dabaw (Alliance of Farmers in Eastern Davao) or Almasid, was gunned down while claiming his benefits under the 4Ps (Pantawid Pamilyang Pilipino Program) cash assistance program of the Department of Social Welfare and Development in Cateel town, Davao Oriental.

The suspect in Lompaodan’s killing had been identified as Dexter Sallian, who was said to be connected with the Army’s 67th Infantry Battalion, according to Palabay.

She could not, however, say if Sallian was a soldier or civilian asset of the military.

The military has repeatedly denied any involvement in the killings.

Palabay said the latest killings and the government’s refusal to accept recommendations made by the United Nations Human Rights Council (UNHRC) “belie the good grades attained by the Philippines” in the UNHRC’s universal periodic review of human rights situations in member countries.

In a statement released then, the group Hustisya (Justice) said while Mr. Duterte “commiserated with families of soldiers and militiamen, where are his tears for indigenous peoples, farmers and urban poor who were killed and violated by his troops?”

From July 1, 2016 to June 30, 2017, the human rights group Karapatan had already documented 67 victims of political killings.

Karapatan and other human rights groups said under the Duterte administration, “the culture of impunity has worsened” not only because of the war on drugs but also because of the counterinsurgency operations. —FRINSTON LIM WITH A REPORT FROM JAYMEE T. GAMIL