SRA chief replaced by exec she predicted would get the post 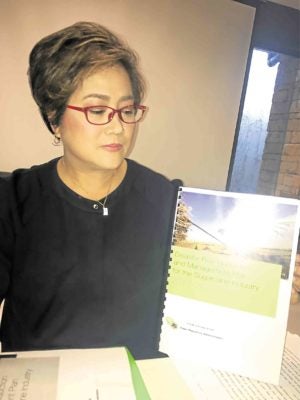 BACOLOD CITY — The former Sugar Regulatory Administration (SRA) official publicly berated by President Rodrigo Duterte had gone public with her version of the story, saying she had been eased out to pave the way for the choice appointee of her immediate boss.

Agriculture Secretary Emmanuel Piñol, who supervises the SRA, announced the appointment on Monday of Hermenegildo Serafica in place of Anna Rosario Paner, former SRA administrator who had been publicly lambasted by Mr. Duterte for supposedly paying excessive fees to a consultant.

Paner went public on Wednesday to air her version of the story, saying Mr. Duterte had been misinformed and misled by those who plotted her ouster.

Paner said she “did not gain anything from any contracts” in SRA, especially that of the consultant who drafted a disaster response plan required by law and found lacking in the agency by the Commission on Audit (COA).

She said she kept quiet shortly after submitting her resignation letter out of respect for the President.

Without categorically accusing Piñol, Paner identified the agriculture chief as the one who had been pushing for Serafica’s appointment as SRA chief. Serafica was former Sugar Board member.

Piñol, however, denied he eased Paner out to make way for Serafica.

“I endorsed her so she was appointed,” Piñol said of Paner. “She should not say that I did not like her from the start. That’s not true,” he said.

In her press conference on Wednesday, Paner also said she felt her ouster was linked to her strong opposition against the unbridled importation of high fructose corn syrup (HFCS), an alternative to sugar and which soda manufacturers now use widely.

The entry into the Philippines of massive amounts of the syrup, which is not manufactured locally, had hurt the sugar industry and led to sharp declines in sugar prices.

Piñol said he does not want to “play the game of Annie Paner” but denied her ouster was because she opposed the importation of HFCS and vigorously implemented Sugar Order No. 3, which regulated HFCS importation.

“There is already an existing sugar order on HFCS,” said Piñol. “It cannot be changed anymore,” he said.

Piñol said the appointment of a replacement for Paner was a sign that President Duterte’s rant about abolishing the agency was just that—an outburst.

“The sugar industry can be assured that the SRA will not be abolished,” Piñol said.

But Piñol refused to answer the HFCS issue. “I will not play the game of Annie Paner,” said Piñol.

He said he wondered what Paner’s motive was in coming out. “I do not know what her purpose is. Cosmetics?” said the agriculture chief.

“You know we are all presidential appointees,” said Piñol. When the President says he does not want you anymore, you should keep quiet,” he said.

Piñol said Sugar Order No. 3 would not be rescinded. “It cannot be changed anymore,” he said.