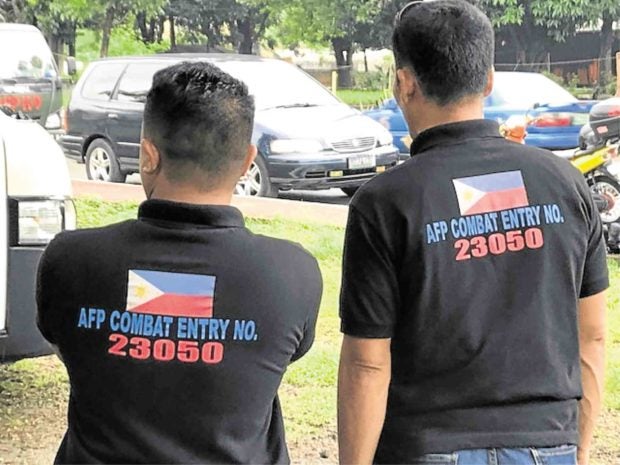 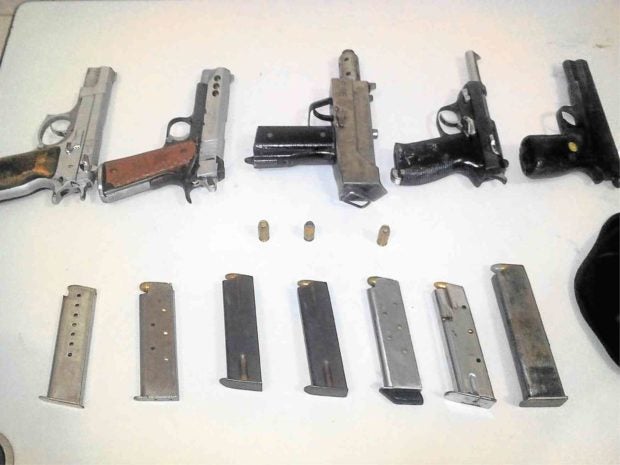 Ten men (two of them in upper photo) arrived in a van on Monday morning at the AFP general headquarters to seek “accreditation” from Defense Secretary Delfin Lorenzana. They were instead placed under arrest and their guns seized. —PHOTOS COURTESY OF AFP

They were armed and they wanted to enter the general headquarters of the Armed Forces of the Philippines (AFP) to seek accreditation from Defense Secretary Delfin Lorenzana as an “intelligence group” that would combat terrorism in the country.

But the 10 men who claimed to be members of the “Southeast Asia Collective Defense Treaty” ended up being arrested and would face a police investigation.

The Armed Forces of the Philippines public affairs chief, Col. Edgard Arevalo, said the military did not see any “immediate indication” that the group was a threat to the camp’s security or to Lorenzana himself.

No exemption from ban

“But then again, the fact that they are bringing firearms at that time when they are not supposed to, or even if they have the authority, they do not have an exemption from Comelec (Commission on Elections). That is the reason why we have to hold them, inquire and then turn them over to the (Philippine National Police),” Arevalo said in a press briefing on Monday.

The Comelec has enforced the gun ban while waiting for President Duterte to sign the law postponing the barangay and Sangguniang Kabataan elections to May 2018.

Arevalo said the AFP would still verify if there was indeed a group called Southeast Asia Collective Defense Treaty.

The arrested men, supposedly from Koronadal City, claimed that “they were fighting terrorists, that is why they want to have an accreditation from the Department of National Defense (DND),” he said.

The group arrived in a van at 5:45 a.m. on Monday and tried to enter Camp Aguinaldo through Gate 6.

An AFP statement reported: “The fact that they wore T-shirts of the same color and design drew the suspicion of the guards on duty. When asked, the men admitted to have firearms in their possession.”

“They said they were on their way to present their letter requesting accreditation to DND Secretary Delfin Lorenzana through a staff. But upon checking, it turned out that they [had] no prior appointment with the office that they intended to visit. Hence, the persons were held for questioning,” the statement added.

The AFP commended the soldiers on duty under Col. John Dominic Pulido, the camp commander, for their “high degree of alertness’’ that led to the arrest.