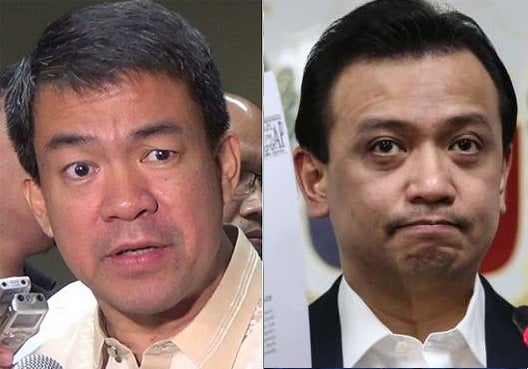 Trillanes said he wanted a change in the Senate leadership because Gordon’s handling of the blue ribbon committee had affected the independence of the chamber.

“The committee of Sen. Gordon is at the center of investigations and it represents the leadership of Senate President Pimentel in the Senate. For me, as long as [Senator] Gordon is there, you will really  see how the independence of the Senate has been affected,” Trillanes said at a Senate press forum.

Trillanes said  as long as Gordon remained at the blue ribbon committee, he would “put the blame and responsibility” on Pimentel.

“If (Pimentel) does not remove (Gordon), I will work hard to have (Pimentel) removed so that [Senator] Gordon would be removed as blue ribbon chair,” he said, adding that the chair of that committee needed to be “objective,” “fearless” and with “a mindset of an investigator” and not a defense lawyer.

Reacting on Trillanes’ threat, Pimentel said in a text message to reporters: “(Trillanes) can go ahead with his plans. This is a free country.”

“The majority bloc, all 16 of us, are solidly supporting [Pimentel’s] Senate leadership. Thirteen votes to oust is extremely improbable,” Lacson tweeted.

There has been bad blood between Trillanes and Gordon,  who had figured in heated exchanges during Senate inquiries, the latest of which saw Gordon filing an ethics complaint against Trillanes.

This after Trillanes dismissed Gordon’s blue ribbon committee as a “comite de absuelto” (committee of exoneration) when they tangled over what the former had alleged as the latter’s lawyering for President Duterte’s son, Davao City Vice Mayor Paolo Duterte, in the inquiry on the P6.4-billion “shabu” (crystal meth)  shipment from China.

At the forum, Trillanes said Pimentel was a “passive” leader and that the latter should have intervened in many instances in the Senate but he just let it pass, including the behavior of Gordon, who acted as if he had a franchise over his committee.

Trillanes said he believed there were other highly qualified senators who could take the place of Pimentel.

Trillanes said he planned to file by next week not only an ethics complaint against Gordon but also a plunder case before the Office of the Ombudsman involving the Philippine Red Cross where Gordon was chair.

Trillanes also said he would write the International Red Cross about Gordon.

In a phone-patched interview with Senate reporters, Gordon said Pimentel was doing a “good job and trying to be fair with everybody.”