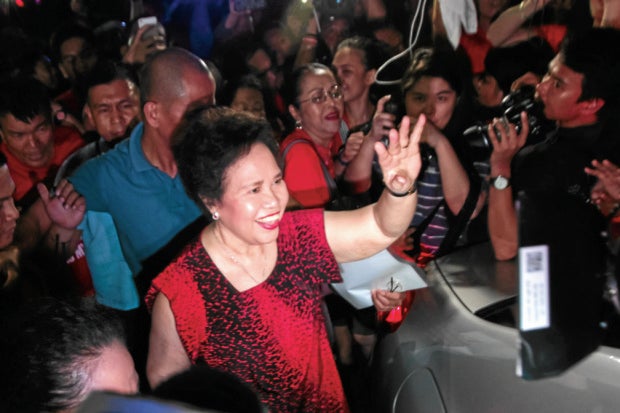 In the past few days, her youth volunteers have reunited, turning again to social media to drum up support for their idol’s crusade for good governance.

“Everyone is encouraged to tie a red ribbon anywhere and wear red (shirt, scarf, shoes, handkerchief, etc.) … as commemoration of the Iron Lady’s greatness,” read their banner on Facebook.

“I’m doing this because Senator Miriam is my ultimate idol. I was actually her first volunteer,” said Paolo Quimbo, 25, one of the concert organizers.

Quimbo continues to update the Facebook site he created in 2014 for Santiago’s supporters.

Since Santiago’s death, the site which was used for her presidential campaign, has been retitled, “The Legacy of Miriam Defensor-Santiago.” It has retained its more than 300,000 followers.

“I’m doing this because Senator Miriam is my ultimate idol. I was actually her first volunteer,” Quimbo said.

Von Villanueva, 23, another organizer, said the senator’s campaign volunteers and former staff members had continued to meet even after her death to mark special occasions such as her birthday.

“We love Miriam. This is our way of paying tribute to her and making sure that her legacy will be passed down to other youths who may have started to forget her,” Villanueva said.

Villanueva wrote the campaign jingle, “Aangat Tayo sa Galing ng Pilipino,” but has revised the lyrics for the concert tonight.

Quimbo and Villanueva said the gathering was also a way to revisit the adventures the volunteers shared during the three-month long campaign last year.

Though most of them were political neophytes, the volunteers carried the campaign by organizing provincial caravans and campus sorties, and campaigning on social media using their own resources.

“The campaign was life-changing because even though we didn’t have any money we still continued to fight,” Quimbo said, recalling the times when he and other supporters slept on the floor with a tarpaulin as mattress, or when they would brave the summer heat and eat on sidewalks.

“I remember campaigning in Rizal province with 10 to 15 other volunteers and we only had P3,000. But we were able to properly budget that amount,” Quimbo said.

Villanueva said some volunteers, including himself, had to give up their job or their time to look for a job in order to go full-time in the campaign.

“They did not have to tell us what to do. We did it because we love her, we believe in her,” he said.

One of his best memories was hosting the launch of the Youth for Miriam volunteers on Valentines’ Day last year.

“It was the first time I was able to hold her hand when I assisted her onstage,” Villanueva said.

Despite Santiago’s cancer and her lagging survey ratings, Quimbo and Villanueva said the senator’s volunteers were never discouraged throughout the campaign.

Villanueva said they were energized by the “Miriam Magic” they witnessed during the campus sorties, where Santiago was treated like a rock star.

“This has been our mantra. So even though she’s not with us anymore we still continue our fight for good governance. We will never stop spreading her advocacies,” he said.

Presidential Spokesperson Ernesto Abella yesterday welcomed the resolution authored by Sens. Grace Poe and Sonny Angara seeking to bestow on Santiago the Quezon Service Cross for her exemplary contributions to the nation.

Abella said that President Rodrigo Duterte highly respected the late senator. “The late senator’s contribution to the country is beyond question,” Abella added.

The award is the highest national recognition of outstanding civilian service in the country in memory of the late President Manuel Quezon. With a report from Philip C. Tubeza