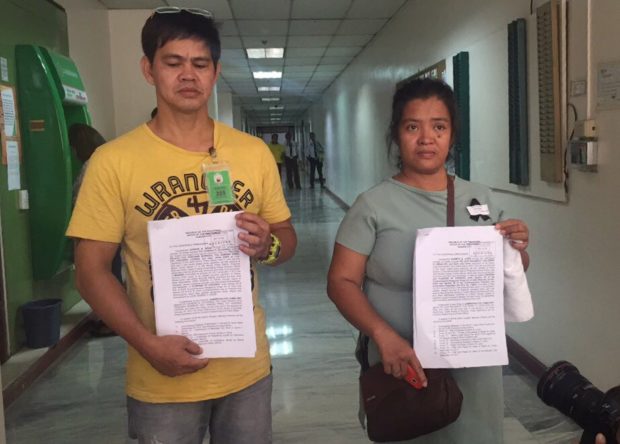 The kin of two tokhang victims on Thursday sued seven police officers before the Office of the Ombudsman for allegedly killing and planting evidence on their sons, one of whom has epilepsy.

The National Union of Peoples’ Lawyers (NUPL) accompanied Dennise Bautista David and Normita Lopez to file the complaint against the policemen for the murder of their sons, John Jezreel David and Djastin Lopez.

Lopez fought back tears when she took her oath before the lawyer in the Ombudsman. Her voice cracked when the lawyer read out the sworn statement that she could be punished for perjury if she committed false testimony.

Lopez took the time to tell the lawyer who subscribed her complaint what happened to her son. She held up her hands as if in surrender, and told her story.

In Lopez’s complaint, the mother accused PO3 Gerry Geñalope and Senior Inspector Jojo Salanguit of shooting and killing her son, who was epileptic.

Lopez said that on May 18, her son left to go to the railway tracks in Tondo to hang out with a friend.

Witnesses said her son and the other people on the railway tracks started running when plainclothesmen arrived in the area, Lopez said.

The police officers caught up with her son and started shooting him even though he held up his hands to surrender, Lopez said.

After shooting her son, the officers also allegedly slapped Djastin to check if he was dead. The police shot him again when he moved, witnesses told Lopez.

Meanwhile, the father of John Jezreel denied the police allegations his son was involved in a drug buy bust operation in Del Pan street, Binondo, Manila, where police recovered from the victims packets of shabu, guns, and a P500 marked money.

In his complaint-affidavit, David said his son was last seen in Jan. 20 when he rode on his motorcycle on the way to work at a Pasay inn.

When he went missing, David said he went looking for his son in police stations, until he was told that his son was detained in Manila Police District-Station 11.

When he was there at the station and did not find his son, a detainee shouted at him: “Kuya, may tatlong natokhang, dinala sa Del Pan, tingnan mo baka isa ang anak n’yo.”

David saw the body of his son at the Cruz Funeral Parlor, where the staff told him his son was among the three who were victims of tokhang in Del Pan.

Witnesses told him the police conducted an operation at a corner on Del Pan street, where the residents were rounded up in a nearby basketball court.

David also provided the Ombudsman photos of a CCTV video, which showed that the police brought the bodies to the hospital like pigs (“na parang baboy”). The CCTV footage also showed one of the police riding his son’s motorcycle.

David said the trumped-up (“gawa gawa lamang”) frustrated murder charges filed by the police against the three tokhang victims have been dismissed by the Manila prosecutor’s office.

David denied his son has a gun and is involved in illegal drugs.