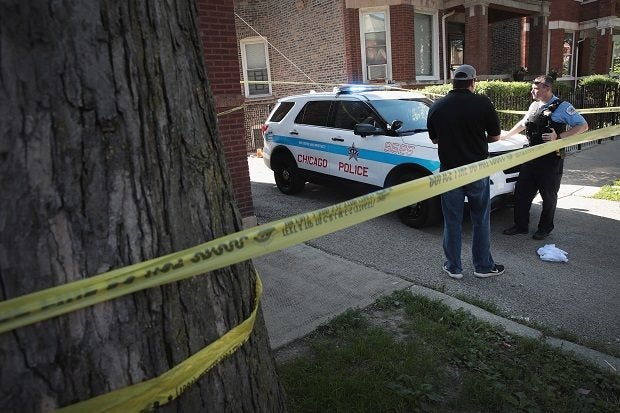 Chicago Police guard evidence near a murder scene in the Humboldt Park neighborhood on July 27, 2017, in Chicago, Illinois. At least 400 murders have been recorded to date in 2017 in the Chicago. The city is on a pace to top last year’s total of more than 750 murders, the highest the number since the early 1990’s.  AFP

Murder and non-negligent manslaughter offenses jumped 8.6 percent — most of those crimes perpetrated with firearms — while aggravated assault and rape increased 5.1 percent and 4.9 percent, respectively, and robbery inched up 1.2 percent.

In the 30 biggest US cities, murder increased 14.8 percent.

Chicago, home to less than one percent of the US population, accounted for more than 20 percent of the jump in murders nationwide, noted The Brennan Center for Justice.

“Crime remains near historic lows, with an uptick in murder and violence driven in part by problems in some of our nation’s largest cities. At the same time, other cities like New York are keeping crime down,” The Brennan Center added. /cbb