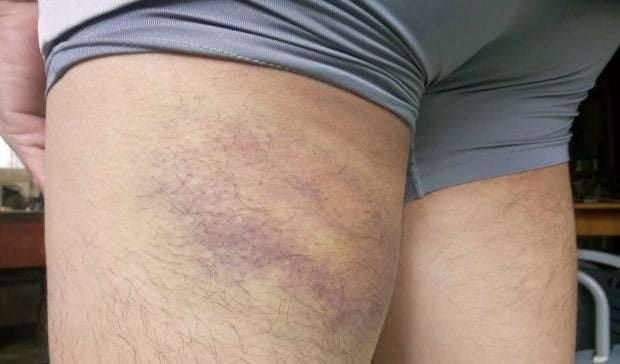 Jeffrey Sarabia, a 36-year-old tourist vehicle driver, shows the bruise on his left thigh where he was hit by a police officer with a baseball bat inside the police station in Panglao town, Bohol last Sept. 20. Sarabia will file a complaint against five police officers involved in the incident. (Photo by LEO UDTOHAN / Inquirer Visayas)

PANGLAO, Bohol—Police here said that the allegation of the tourist driver Jeffrey Galon Sarabia that he was beaten by a police using a baseball bat inside the police station was just a drama.

READ: Driver in Bohol to sue cop who hit him with a bat, four other officers

“During that time nakadungog man siya sa biktima kadtong taga DepEd staff nga eager mo-file og kaso against niya. Siguro naghimo-himo lang siya ana diversion or rason para para makuha ng simpatiya sa biktima (During that time, Sarabia heard that the victim who was a DepEd staff was eager to file a case against him. That’s why he made it, a diversion or reason to get sympathy from the victim),” Yana added.

Yana said Sarabia was a suspect in a case of theft based on their witnesses—the DepEd employees.

Sarabia, 36, a tourist driver, was with three employees of the Department of Education (DepEd) who went to Panglao Central School to conduct validation last Sept. 20 at past 4 p.m.

The victim (who asked for anonymity) said she left her bag at the vehicle parked near the town plaza. While waiting, Sarabia amused himself watching basketball at the town plaza that he forgot to lock the van.

After 30 minutes, when employees returned to the vehicle, they discovered that the things inside the van were scattered. One of the employees lost her P2,500 cash.

Sarabia admitted that it was his fault and told the employee that he will pay the P2,500 when they returned to Tagbilaran City. However, they decided to blotter the incident at the Panglao Police Station.

In a statement by the Panglao Police Station on Monday, it said the victim and her two other colleagues conducted inquiry in the area but a reliable source told them that Sarabia did not come down from the vehicle.

“At that time the victim confronted the driver suspecting that he was the one responsible in stealing her money. The commotion happened in the area and both were advised by the responding officers to settle their problem at (the) Panglao PNP station,” the statement said.

But the two DepEd employees told the Inquirer there was no commotion ever happened.

The statement added “at the station the victim narrated the incident and the same was recorded in the police blotter. Jeffrey’s name and the personal circumstances were taken for recording purposes. After the victim manifested that she was still undecided to pursue her complaint, the victim and the suspect left our office. That is why our office wonders on how it could happen that Jeffrey alleges that he was mauled while at Panglao Police station.”

However, the DepEd employees said they left for Tagbilaran and left Jeffrey at the police station since they were told by police that Sarabia had to stay for some interrogation.

She also clarified she was not willing to file a complaint since she didn’t know who took her money.

Sarabia said he was brought by PO1 Heracleo Padillo Jr. to the second floor of the station. He was told to undress and he was beaten using a baseball bat in his left thigh that caused bruises.

According to Sarabia, another police who was not wearing his uniform, told him to admit that he stole the money.

“Ug dili nimo iuli ang kuwarta madugangan ang imong kaso, planteran ka nako og duha ka putos karun (If you will not return the money there will be another case against you since we can plant two pieces of (shabu) now,” said Sarabia who quoted the police.

Sarabia was diagnosed with hematoma or soft tissue contusion based on a medical certificate.

Yana insisted that there was no mauling happened. And for Sarabia’s bruise, he said Sarabia invented stories.

“Walay nahitabo nga pangbun-og ug pamunal kay diri raman sila sa lobby (No mauling happened because they were only at the lobby [of the police station]),” he said.

Sarabia said the incident was still rankling in his mind it had been six days since he was beaten.

Sarabia said he will be filing charges against Padillo and three policemen this week. /jpv