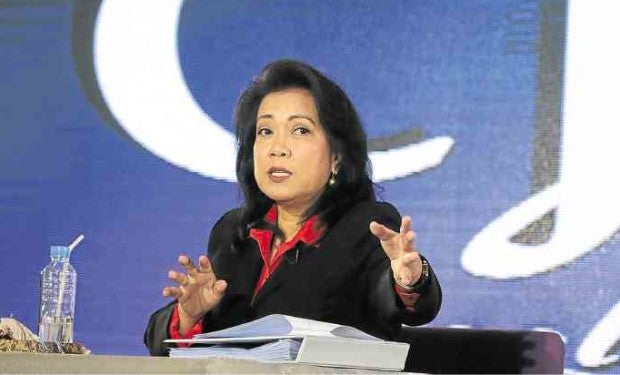 The camp of Chief Justice Maria Lourdes Sereno on Monday submitted her reply to the impeachment complaint accusing her of corruption, betrayal of public trust, and culpable violations of the Constitution.

Lawyer Justin Mendoza went to the House of Representatives justice committee office and filed Sereno’s written response belying allegations of her supposed extravagant lifestyle in buying a Toyota Land Cruiser using public funds, her alleged failure to disclose in her Statement of Assets and Liabilities Net Worth exorbitant lawyers’ fees, among others.

Sereno stands accused of betrayal of public trust for her “strongly-worded but misplaced reply” on President Rodrigo Duterte’s narcolist implicating judges in the drug trade, urging the magistrates not to surrender to police without an arrest warrant.

She is also accused of “prevent(ing) the Justices of the Court of Appeals to do a courtesy call on President Rodrigo Roa Duterte.”

In a press conference after the filing, Atty. Alex Poblador said the impeachment complaint based on newspaper reports is “hearsay,” adding that the complainant does not have personal knowledge on the allegations contained in the complaint.

The complaint may be attached with authentic documents culled from the Supreme Court (SC), but these do not support the allegations in the complaint, he added.

He further said the political matters in the complaint, such as Sereno’s statements critical of the administration’s policies, are not of legal matters that the team would like to discuss.

Poblador, however, cautioned the House members against following the whims of their political leader.

“Although elected by the people, the members of the House have to administer true justice, and that is to decide on the basis of facts and applicable law, not on the basis of the dictates of their political leaders following some kind of political agenda,” Poblador said.

Poblador later clarified his statement about the politics behind the impeachment proceeding: “It’s not a statement of fact. It is a statement of possibility, with the hope that all of them still have open minds.”

For his part, Atty. Aldwin Salumbides said the Chief Justice is living up to her name of being “serene” in the face of the impeachment case against her.

He added that the Chief Justice does not want to “politicize” the judiciary by calling it to rally behind her cause, adding that she wants the high court to be “business as usual.”

“She’s a picture of serenity. She is unfazed, because she knows in her conscience that she did not do anything wrong,” Salumbides said.

The impeachment complaint filed by lawyer Larry Gadon was earlier found sufficient in form and substance by the House of Representatives justice committee.

A second impeachment complaint accusing Sereno of bypassing the en banc in the creation of new offices was junked by the panel due to a verification defect.

She earned the ire of Speaker Pantaleon Alvarez when she supposedly cautioned Court of Appeals justices not to attend a House probe on the Ilocos Norte provincial government’s allegedly anomalous use of tobacco funds that implicated Governor Imee Marcos.

The justices were called to explain why they should not be cited for contempt for granting a writ of habeas corpus to the six provincial government officials detained at the House. /cbb