During the justice committee hearing on Wednesday, 30 members found the Gadon impeachment complaints to be sufficient in form.

It was sufficient in form because the complaints were duly endorsed and verified by 41 lawmakers.

Coop-Natcco Rep. Anthony Bravo, among the lawmaker-endorsers, moved to find the complaint filed by Gadon sufficient in form, citing the need for Congress to look into the allegations that Sereno is unfit to hold public office.

Bayan Muna Rep. Carlos Zarate, Akbayan Rep Tom Villarin, and Albay Rep. Edcel Lagman opposed the motion, saying the complaint should fail in form because it was based on newspaper clippings.

But committee chairperson Oriental Mindoro Rep. Reynaldo Umali and majority leader Rudy Fariñas vouched that the complaint is based on authentic documents, released by the Supreme Court on Aug. 15. 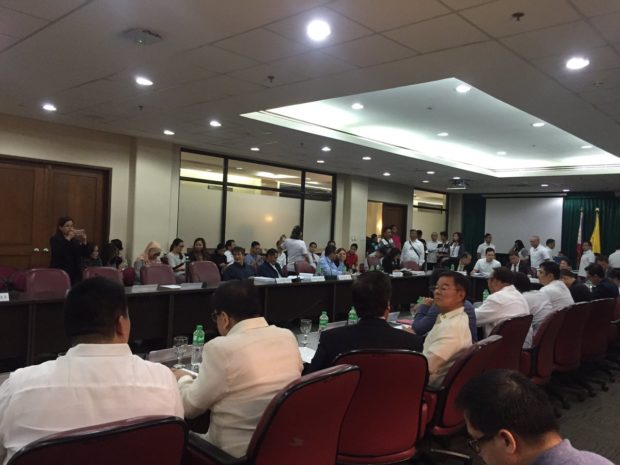 Fariñas said the Gadon complaint even contained certified true copies of resolutions from the Supreme Court, Sereno’s Statement of Assets and Liabilities Networth (SALN), the chief magistrate’s foreign trips abroad, the certified documents on the purchase on motorcycles used by her escorts, and the Toyota Land Cruiser allegedly used as her personal vehicle.

When the vote was called out, at least 30 members of the committee stood up in favor of the impeachment complaint.

Later on, at least 30 members of the committee stood up finding the complaint sufficient in substance.

The complaint is sufficient in substance if the recital of facts constitute the offenses charged.

At least four lawmakers opposed the finding of sufficient substance.

The lawmakers who opposed it said the complaint should fail in form because it was based on hearsay evidence due to the attached newspaper clippings.

They said the committee should be stricter in determining the sufficiency of form after the panel dismissed the impeachment complaint against President Rodrigo Duterte due to the complainant’s lack of personal knowledge on the allegations.

“They’re all based on newspaper clippings. I don’t think the complainant Gadon was present when all these things happened… There are more allegations here that are pure hearsay,” Villarin said.

Umali later said the lawmakers are “overgeneralizing” the complaint when there are authentic documents released by the Supreme Court attached to the complaint to back up the allegations.

Zarate cautioned the committee of being used in a “fishing expedition” just to justify the impeachable offenses alleged in the complaint.

“These proceedings should not be used for a fishing expedition just to justify the grounds,” Zarate said.

Lagman said the committee must be stricter in scrutinizing the form of the Gadon complaint following its decision on Magdalo Rep. Gary Alejano’s complaint, which was found sufficient in form with the caveat that the panel would no longer be liberal next time.

“Since according to the committee, the Honorable (congressman) Alejano did not have any personal knowledge on the allegations of his complaint, then the (Gadon) complaint must fall under the scrutiny of sufficiency of form and substance,” Lagman said.

“In this particular case, we have a private complainant, in the person of Atty. Gadon, who did his own work. And while he may not have personal knowledge, he appended to this complaint authentic records, and that is what’s lacking in the Alejano complaint,” Umali said.

In his opening speech, Umali touted the political nature of an impeachment proceeding, and that the lower House as duly elected representatives of the people should step in to protect democratic institutions like the Supreme Court.

“We should remember impeach proceedings are political in nature. The power of impeachment is exercised by duly elected representatives of the people,” he added.

In his complaint, Gadon accused Sereno of corruption for using “public funds to finance her extravagant and lavish lifestyle by ordering the purchase of a brand-new luxurious Toyota Land Cruiser 2017 model as her personal vehicle, amounting to more than P5 million.”

“Respondent Sereno was not content with the vehicles assigned to her, a fairly recent model of Toyota Camry sedan and a Hyundai Starexvan. She wanted more,” Gadon said.

Gadon also accused Sereno of corruption for using taxpayers’ money to “stay in opulent hotels when attending conferences in the Philippines and abroad, and flying on business or first class together with her staff and security.”

“She used public funds to flaunt her extravagance by unnecessarily bringing a huge entourage of lawyers in her supposed official foreign trips,” Gadon said in the impeachment complaint.

Gadon said Sereno committed a culpable violation of the Constitution for allegedly failing to truthfully disclose her SALN.

Gadon alleged that Sereno was “untruthful” because she “deliberately excluded” in her SALN alleged “exorbitant lawyer’s fees” amounting to $745,000 or P37 million she received from the Philippine government.

“Accordingly, the failure of Respondent Sereno to be truthful in her SALN is another instance of culpable violation of the Constitution that merits her immediate dismissal from the service,” Gadon said.

The issue of SALN declarations by magistrates is a sensitive issue since the late Chief Justice Renato Corona was convicted by Congress acting as an impeachment court for false declarations of wealth in his SALN.

Sereno is also accused of culpably violating of the Constitution when she “manipulated” the shortlist of the Judicial and Bar Council to exclude former Solicitor General Francis Jardeleza over “personal and political reasons, thereby disgracing then Sol. Gen. Jardeleza, and curtailing the President’s power to appoint him.”

Gadon accused Sereno of betraying the public trust for her “strongly-worded but misplaced reply” on President Rodrigo Duterte’s narcolist implicating judges in the drug trade, urging the magistrates not to surrender to police without an arrest warrant.

Gadon also alleged that Sereno “prevented the Justices of the Court of Appeals to do a courtesy call on President Rodrigo Roa Duterte.”

“She attacked the imposition of Martial Law in a commencement address, while the validity of Martial Law was still pending before the Supreme Court, and later continued to participate in the Court’s deliberations,” Gadon said.

Gadon also accused Sereno of committing other high crimes, when she allegedly “obstructed justice by ordering the Muntinlupa Judges not to issue warrants of arrest against Senator Leila M. De Lima.”

Sereno also allegedly “perverted justice” when she met with the Presiding Justice and Associate Justices of the Court of Appeals instructing them not to comply with the processes of the House of Representatives, which earlier issued a show cause order against the appellate justices who granted the writ of habeas corpus of the Ilocos Six.

Gadon also accused Sereno of “fail(ing) to report her extortionate attorney’s fees and pay the appropriate taxes therefor,” as well as “embellish(ing) her Personal Data Sheet (PDS) in her application for the Judiciary to overstate her credentials.” /idl