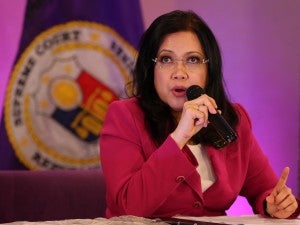 MANILA, Philippines – Chief Justice Maria Lourdes Sereno has been accused by one of her associate justices of allegedly manipulating the selection process of the Judicial and Bar Council (JBC) to make sure that Solicitor General Francis Jardeleza won’t sit in the Supreme Court.

In his 36-page separate concurring opinion, Associate Justice Arturo Brion said given the facts in the case of Jardeleza, it was clear that there was someone who didn’t want him to be named associate justice.

Jardeleza has since been appointed to the Supreme Court but he nearly didn’t make it because he wasn’t included in the shortlist of candidates submitted by the JBC to President Benigno Aquino III despite getting the required number of votes to be shortlisted. Sereno chairs the JBC.

A copy of the Supreme Court ruling was released Friday, including Brion’s separate concurring opinion:

“I strongly believe, too, based on the circumstances … that CJ Sereno manipulated the JBC processes to exclude Jardeleza as a nominee. The manipulation was a purposive campaign to discredit and deal Jardeleza a mortal blow at the JBC level to remove him as a contender at the presidential level of the appointing process,” Brion said.

First, Brion said Sereno’s objection was made at the last moment and not earlier when the shortlist was still being drafted.

Second, Brion said, Sereno raised her objection to Jardeleza’s inclusion in the shortlist after “it became obvious that Jardeleza would get the required votes unless an overt objection was made.”

Brion said even the Supreme Court appeared to have been manipulated when it was not given the chance to vote for its recommendees. The high court, who has overall supervision of the JBC, always voted for their preferred candidates in the shortlist.

In this case, however, Sereno submitted a letter to the high court dated May 29, 2014, saying she represented several justices who requested that the court do away with the voting for its recommendees.

“When subsequently confronted on who these justices were, the Chief Justice failed to name anyone. As a result, applicants who could have been recommended by the Court (Jardeleza, among them), missed their chance to be nominees,” Brion said.

Thirdly, Brion said the JBC did not require Sereno to put in writing her objections.

“Nothing was done, however, to fully specify what the objections were, or to provide for safeguards if the ground indeed should be highly confidential,” he said.

Fourth, Jardeleza’s letter-petition to the Supreme Court was not raffled off immediately but assigned to a justice only five days after it was filed.

Fifth, after Jardeleza filed his petition on July 18, a resolution ordering the JBC and the Palace to comment was issued only on August 1 or 19 days from Aquino’s deadline to appoint a new justice.

“Indeed from the seat of power and control, one may manipulate events with facility so that the moving hand remains unseen. But over time and when the dots are inevitably connected to one another, the pattern will show,” Brion said.

Jardeleza went to the high court after the JBC excluded him from the list. In his letter-petition, he said if a complaint was filed against a candidate, it must be made in writing and under oath. The concerned candidate, he said, should be given a copy in order to be able to file his comment.

The high court, in its August 19 ruling, granted Jardeleza’s prayer, paving the way for his inclusion in the shortlist. A day later, Aquino appointed him associate justice.