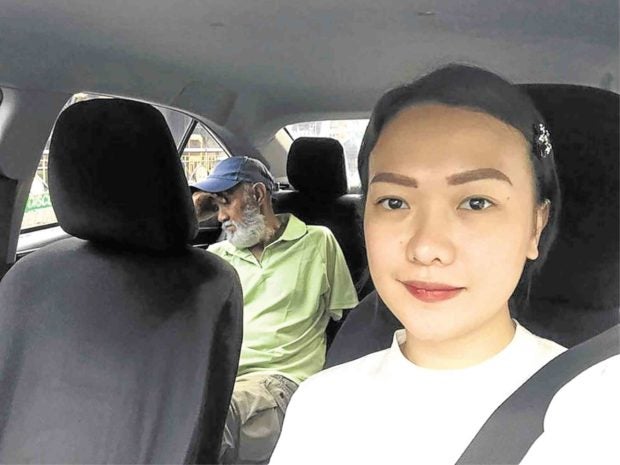 Cristina Tan manages to take a selfie in the driver’s seat as the weary cabbie takes a much-needed nap behind her.—PHOTOS FROM CRISTINA TAN’S FACEBOOK ACCOUNT

Cristina Tan, a 31-year-old art dealer, had just begun her hourlong taxi ride from Pasay City to her San Juan residence on Sept. 15 when the driver admitted he was too sleepy to go on and asked her to just find another cab.

What happened next was a moving — and now viral — role-reversal story that could soothe a weary commuter’s brow.

Such a proposition from the driver could leave any rush-hour passenger fuming. But Tan’s first instinct was to offer to switch places with the driver instead.

Recounting the experience in a Facebook post, Tan said the 67-year-old Rolando Sarusad initially hesitated to yield his seat, asking whether she could drive a manual.

But she eventually convinced him — and drove the rest of the way home for about 45 minutes, as the driver slept in the backseat.

She even managed to take a selfie as she steered, with Sarusad dozing off behind her. She later included the photo in her Facebook post that had been shared more than 23,000 times as of this writing.

“My first time to drive a taxi. Haha,” she wrote in Filipino. “I insisted that I be the one to drive since my house was still quite far… But I also insisted so he could take a nap while we were stuck in traffic. Finally when I was driving, he easily fell asleep and was even snoring.”

In an interview with the Inquirer on Saturday, Tan recalled also putting her phone on silent to make sure Sarusad wouldn’t be disturbed from snoozeland.

Before falling asleep, she said, the driver settled into the backseat as if there was nothing unusual about their arrangement. But he soon started singing Tan praises: “Aba, OK ah! OK ka!”

The anecdote only got more amusing from there. People waiting for a ride on the sidewalk would try to flag her down: At first it baffled Tan, until she realized that, well, she was driving a taxi. She read their smiling lips saying “wow” as they noticed the pretty “cabbie” in a white, long-sleeved flounce blouse.

Upon reaching her destination, Tan woke Sarusad up and paid him P500, double the fare on the meter.

“Manong (Sarusad) told me to just pay half the fare, just for the gas, but I wanted to give him P500 so he wouldn’t need to drive for much longer that day,” Tan said.

It was actually all the cash she had left at the time. 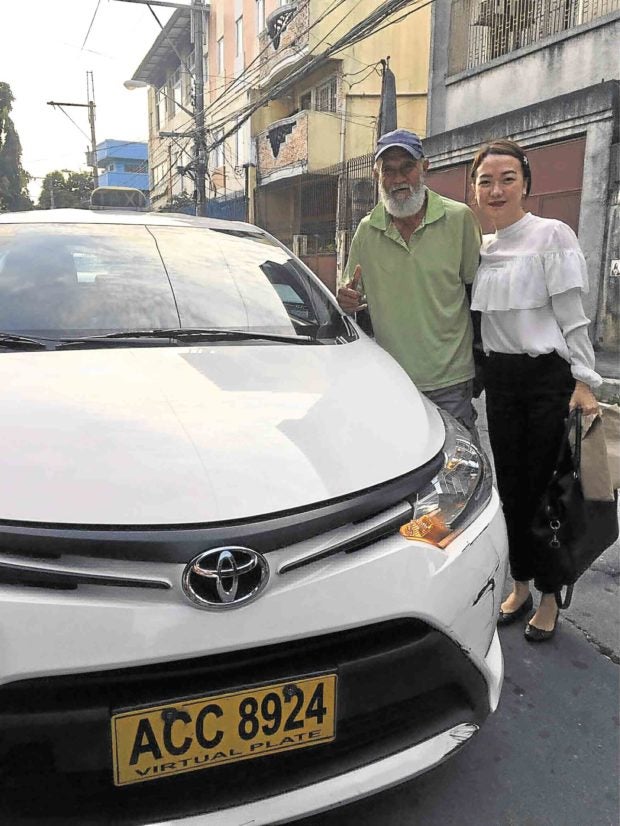 A parting shot of the “Good Samaritan” and her newfound 67-year-old friend upon reaching her destination.

In that short encounter, Tan learned that Sarusad had been working as a driver since the Marcos years.

“I could empathize with him right away,” she said, since the gray-bearded driver reminded her of her own father, who passed away in 2015.

If only there were such a thing as a “rent-a-father service,” she would be its first patron, she said. She was very close to her father, paying for his medical checkups as he suffered from diabetes.

The taxi ride was not the first time Tan formed brief but memorable connections with senior citizens she would randomly meet in the street.

“After my father died, I noticed that I was getting drawn to the elderly,” she said. “I would sit beside them and talk with them.”

Netizens were quick to praise Tan — a hotel and restaurant management graduate from Infotech Institute of Arts & Sciences in Mandaluyong — for being a “Good Samaritan” and for being “beautiful with a golden heart.”

But the people who know her best wouldn’t be as surprised. An art dealer for a year now, Tan also serves as president of Silent Power of Youth, a volunteer organization that has been doing outreach projects for the poor for the last 10 years.

Every Christmas, for example, Tan and her group treat informal settlers to free meals at Rajah Sulayman Park in Manila. They have also helped in relief work for typhoon victims in the city.

She once shouldered the hospital bills of a cash-strapped friend who gave birth, and paid laborers out of her own pocket just to rush the repair of a road damaged by flood in a slum community in Barangay Batis, San Juan, where she was raised.

She said she took it upon herself to speed up the road work “without coordinating with the local officials.”

“Others are in a position of power, not me. But that didn’t stop me,” she said. “If you are capable of doing something good, then just do it.”

Take it from a lady who is willing to take the wheel.