LOOK: Noynoy, Leni attend ‘Mass for Justice’ at UP Diliman 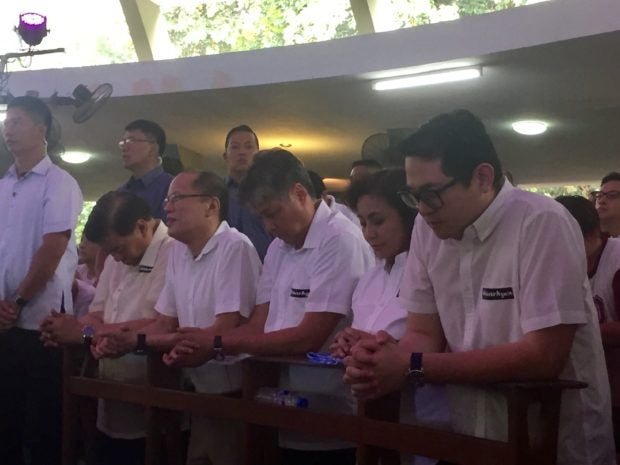 Former President Benigno Aquino III and Vice President Leni Robredo were among those in attendance at the Mass for Justice on Sept. 21, 2017. FRANCES MANGOSING/INQUIRER.net

Former President Benigno Aquino III and Vice President Leni Robredo were among those in attendance at the “Mass for Justice” at the Parish of the Holy Sacrifice at the University of the Philippines Diliman on Thursday.

The mass intended to commemorate the martial law regime and its victims was offered by anti-extrajudicial killings group Tindig Pilipinas.

All of the members of the Liberal Party were in white shirts.

Supporters of the Liberal Party and some of the cabinet members of the former Aquino administration also attended the event.

Flowers and candles were offered by the LP leaders at the end of the mass.

Senator Aquino said urged citizens to be more vocal in expressing what they don’t like in the administration.

Roxas, who lost to Duterte in the 2016 elections, said he does not want to blame Filipinos for electing its current leader whose war on drugs campaign has left thousands killed so far.

The attendees proceeded to the Commission on Human Rights after the event for the unveiling of the Jose Diokno Monument. /je