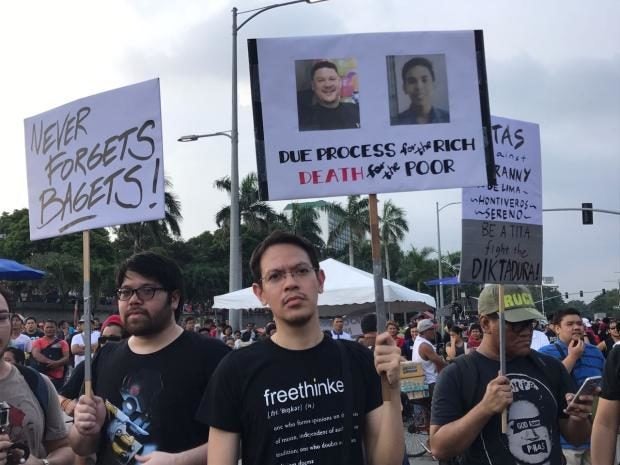 Some of the first protesters who arrived at the Rizal Park at around 4 p.m. on Thursday, Sept. 21, 2017. (Photo by MAILA AGER / INQUIRER.net)

Mostly wearing black, thousands of people gathered at the Rizal Park on Thursday afternoon to denounce the continued killings in the country and call for an end to tyranny.

The protest action, organized by the Movement Against Tyranny, started at 5 p.m., though many participants started arriving as early as 4 p.m.

“Never again, never again to martial law” was the people’s chant at the rally, which was taking place on the 45th anniversary of the declaration of martial law by President Ferdinand Marcos.

People from all walks of life – including children, students, nuns and priests – attended the gathering.

Catchy messages printed on the placards and tarpaulins caught the attention of many.

Participants in the rally were advised not to engage any person who might provoke them.

But if the provocation should become violent, they were told to report the incident to marshalls.

Aside from the catchy messages, five young children, who were raising their hands and holding a placard that said “No to martial law” had also caught the attention of the attendees.

The kids were aged eight to 12 years old.

The moment they sat on the grass, holding the placard which read “No to martial law. Defend job Philippines” the kids immediately caught the attention of the media and even some people attending the rally at the Rizal Park in Manila. 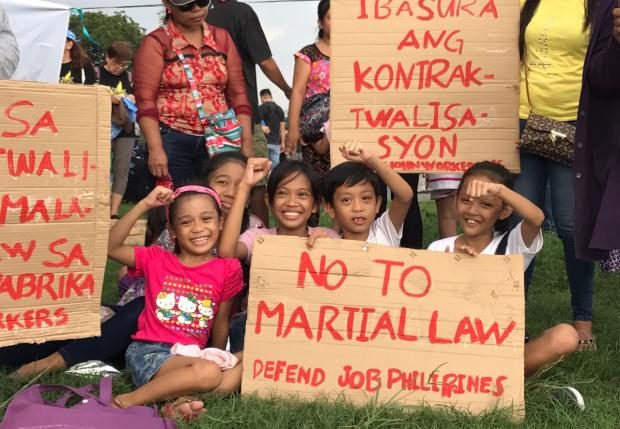 Asked if they knew what they were doing at the park, the only boy in the group said: “Nagra-rally para itaas ang sahod ng mga manggagawa.”

Three of the kids are children of 37-year-old Arlyn Duhaylungsod, a member of the Samahan ng mga Mangagawa.

Her fourth and youngest son was also with her at the rally site.

Duhaylungsod said her husband, also a member of Samahan ng mga Manggagawa, was also at the rally.

Old and young came to join the rally. /atm