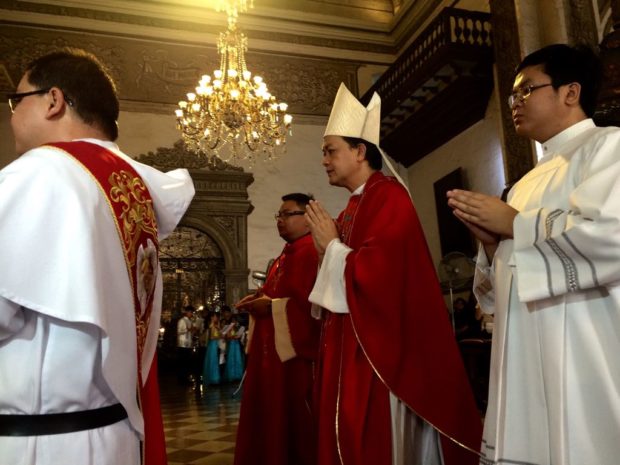 The silence of many over the spate of killlings in the past year can be likened to that of the Germans when Adolf Hitler began his extermination of the Jewish race: silence due to fear and complicity.

With this in mind, a Catholic bishop warned the faithful not to give in to anger and retaliation and to restore the dignity of the Filipino by renouncing the violence that has terrorized the nation.

“Let us never return insult for insult; that will bring us nowhere. Let us renounce cruelty and violence. Let us restore our dignity as a people,” said Caloocan bishop Pablo Virgilio David.

David delivered the homily at a Mass on Thursday afternoon at the San Agustin Church in Intramuros in commemoration of the 45th anniversary of the declaration of martial law.

The prelate is one of the Catholic Church’s more outspoken critics of the spate of extra-judicial killings amid the Duterte administration’s war against illegal drugs.

His diocese, which covers Caloocan City, Malabon City and Navotas City, is where many of the victims of such killings took place in the past year.

The Mass was attended by scores of protesters who were expected to troop to the Luneta to hold demonstrations against the spate of extra-judicial killings and martial law.

In his homily, David likened the normalization of the culture of death and the silence of many FIlipinos as similar to the attitude of the Germans to the extermination of Jews during World War II.

“Because many of them hated the Jews, they just shut their eyes and ears to the killings. They were aware of what was going on, but they kept quiet about them. It wasn’t always fear that silenced them. Sometimes it was plain complicity,” he pointed out.

The prelate reiterated his appeal to the faithful to fight criminality, “but in a manner that is lawful and humane.”

“They are human beings; their addiction to drugs is a disease, a serious disease. What they need are not bullets but rehabilitation… For God’s sake, stop the killings, start the healing!” he said.

For David, it was not true that criminals could no longer be reformed, since to believe so would be to give up a principle of the Christian faith: that all only live by the grace and mercy of the forgiving God.

He stressed that one should not give in to provocation, anger and retaliation since violence only begets more violence.

Instead, he called on the public to try to understand more deeply the problem of illegal drugs and how it is linked to poverty and desperation.

David also warned the faithful against termites which infest not only houses but communities and the Filipinos’ collective conscience as well.

The prelate added: “We were called to be humane, to be refined in our ways. Let us renounce evil and embrace what is good. Let us never fight evil with evil. Rather, let us conquer evil with good.” /je