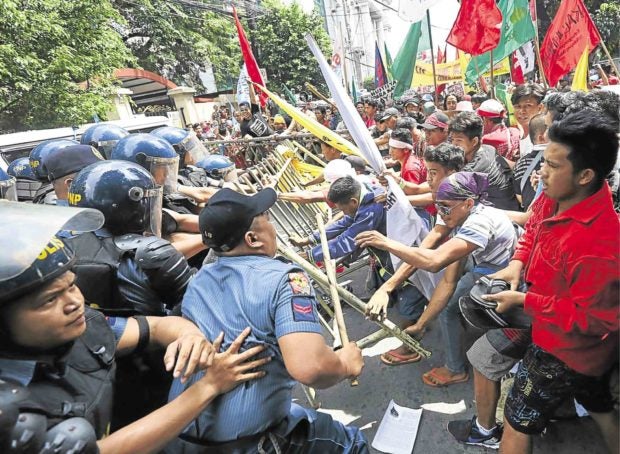 Militants protesting injustices against indigenous groups clash with policemen in front of the Department of Justice on Tuesday. —MARIANNE BERMUDEZ

Accusing Justice Secretary Vitaliano Aguirre of complicity “in the injustices against national minorities,” including the killing of a lumad teenager, members of militant groups Sandugo and Karapatan, together with Bangsamoro and indigenous peoples, protested in front of the Department of Justice (DOJ) office in Manila on Tuesday.

“Ever since President Duterte appointed him DOJ secretary, Aguirre has been consciously coming out with ridiculous stories and poorly woven lies to justify the regime’s abuses,” Sandugo cochair Jerome Succor Aba said.

On the other hand, Cristina Palabay, Karapatan secretary general, told the Inquirer that the DOJ has become a “factory of cases” against indigenous peoples and church leaders working alongside them.

Sandugo cited two cases, that of 19-year-old ‘lumad’ Obello Bay-ao who was shot dead on Sept. 5 by two members of a paramilitary group, and 74-year-old Kalinga native and political prisoner, Marcos Aggalao  who died on Sept. 12. Aggalao passed away while in detention despite pleas for his release over his poor health.

Sandugo accused Aguirre of not acting on the two cases “while he actively pursues [the] filing of trumped-up charges against community leaders [and] lumad school teachers.”

Aba said that Aguirre has “completely thrown [away] Lady Justice’s blindfold” in the service of Mr. Duterte. During the rally, two protesters wearing masks of Duterte and Aguirre rode a motorcycle with organizers saying this was their way of depicting the two officials as tandem-riding gunmen.

Widespread protests are further expected on Sept. 21, the anniversary of the declaration of martial law.