Martial law victims find no justice in ‘moving on’

Fourteen-year-old Ruben Manog was alone and crying. His whole body shook with a dreadful thought: This is the day I’m going to die.

That did not happen on that day in 1982. Still, for one year and seven months — in isolation and  during torture sessions—Manog was certain he was good as dead.

Today, the 49-year-old with the calloused hands of a welder feels lucky to have survived the strongman rule of Ferdinand Marcos.

More than 3,200 extrajudicial killings and 35,000 torture cases were recorded from 1975 to 1985, according to American historian Alfred W. McCoy.

Forty-five years since the declaration of martial law on Sept. 21, 1972, martial law survivors like Manog face a new kind of horror — historical revisionism and whitewashing of the suffering under the dictatorship highlighted by Marcos’ burial at Libingan ng mga Bayani.

“How could Marcos ever become a hero, when thousands of innocent civilians died during his regime?” Manog told the Inquirer. “I wanted to be an architect, a designer. His martial law stole that from me.” 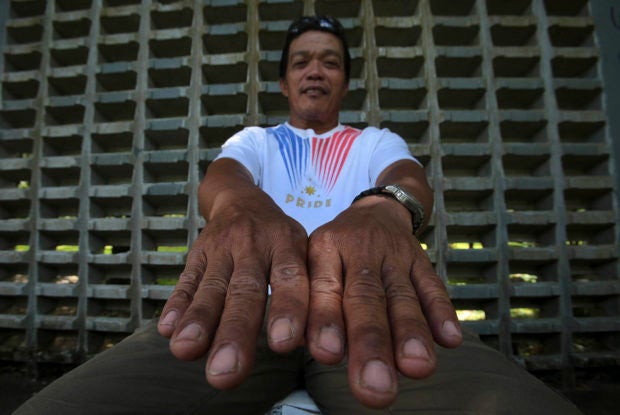 TORTURED Ruben Manog shows his hands that were chained when he was then 14 years old while he and his father were tortured by soldiers in Western Samar. —GRIG C. MONTEGRANDE

It was in 1982 when the 6th grader and his entire family were tagged by the military as members of the New People’s Army (NPA), the armed wing of the Communist Party of the Philippines (CPP) in Western Samar.

Manog recalled that Army soldiers passing through their village had seized him, branding him — a 14-year-old, though muscular from working in the farm but shorter than most kids his age — an NPA commander.

He could not believe the accusation. “I don’t even know how to wear long pants then … and I barely reached up to their waists,” he said.

What followed were daily fist blows and beatings with the butts of M16 rifles he called “frightening massages.” Soldiers also burned his hands and feet with cigarettes and once told him to strip and play with his genitals, which he refused to do.

He was thrown into solitary confinement in various Army camps where his hands, feet and abdomen were tied so that he could hardly move. He said he became “skin and bones” because he was fed only watery rice, much like pig slop, every two weeks.

“With all that torture, what was only left was for them to finally shoot me in the head,” he said.

His agonies ended only after a court ordered him freed from detention in 1984. With his release papers he headed straight home.

“I walked 15 kilometers from the prison to my house, only to see soldiers rain bullets on our home and take my father away,” he said.

Manog wept as he recalled how his 42-year-old father, Uldarico Manog, a farmer and businessman, suffered even worse abuse.

Soldiers skewered his father’s neck with a bamboo stick and flayed the soles of his feet, he said. They found the decaying remains of his father in the middle of a road about a month later.

“I think I was just used as bait to get my father … It is still so hard to accept that he was killed,” he said, wiping his tears. He said he was very close to his father who taught him all he knew about farming.

No body to bury

For Joey Faustino, it was the loss of his brother that had opened his young mind to the horrors of martial law. But unlike Manog, the then 13-year-old from Quezon City had no body to grieve over and bury—up to this day.

In 1977, 21-year-old Gerardo “Gerry” Faustino, a graduating student from the University of the Philippines Los Baños (UPLB), was abducted along with nine others from the university. The “Southern Tagalog 10” was considered the single biggest case of abduction under martial law.

Faustino said his brother was a student activist and was an outspoken supporter of farmers and workers. His brother discussed what ailed Philippine society with him and introduced such concepts as fascism.

The discovery of Gerry’s ransacked dorm room and the family’s frantic search for him, or his remains, had opened Faustino’s eyes to what his brother had been fighting for.

The search for his brother brought them and other families who had sons and daughters also missing around that time to two mass graves in Mauban, Quezon province, where soldiers had buried “young rebels” who were supposedly killed in an “encounter.”

“It was not a sight to see for a 13-year-old boy,” Faustino said in an interview, trying to hold back his tears. “All [nine] bodies had smashed skulls… and bullet wounds all over their bodies.”

They did not find his brother in the mass graves. “A part of me wanted to see him there, so we can finally end our search. But on the other hand, I also wished he was still alive,” he said.

“Right there and then, in front of my eyes, the word [fascism] came alive—the cruelty of the state, of the military,” he added.

“The state did not just steal my brother, but also my family … We were left a wreck, and I was left all alone to deal with his disappearance,” he said. “But [what happened to us] never left me. It has practically ruled over my life.”

Faustino is helping others who are in the same situation as secretary general of Families of Victims of Involuntary Disappearances (FIND). He is also executive director of the Coconut Industry Reform Movement, which works for the return to coconut farmers of the coco levy funds that were purloined during martial law.

FIND has documented 878 disappearances under martial law out of 1,800 recorded since the Marcos regime.

Faustino said the Marcos family and their fervid defenders deeply insulted the families of the disappeared when they told them to simply “move on.”

“How can you move on, when our wounds would not heal because our loved ones are still missing?” he said.

“If you want to move on, move on to seek justice, to fight for justice, to defend human rights, and not let martial law and authoritarian rule to rule over again. That is moving on,” he said.

Read Next
Nationwide quake drill postponed
EDITORS' PICK
Gordon to Pharmally’s Mago: Show up or be a fugitive
Smart reaffirms 5G leadership as PH’s most reliable 5G mobile operator
Huawei’s relentless mission to bring ultimate health and wellness tracking for your fitness goals
4 essentials for overcoming data protection challenges in the New Normal
Pharmally’s Mago no longer in her condo unit — Gordon
294 areas in NCR under granular lockdown — PNP
MOST READ
Pharmally’s Mago no longer in her condo unit — Gordon
Senators secure Pharmally exec offering to turn witness
Guimbal, Iloilo Mayor Oscar Garin passes away
Bong Go says he is not seeking presidency in 2022
Don't miss out on the latest news and information.