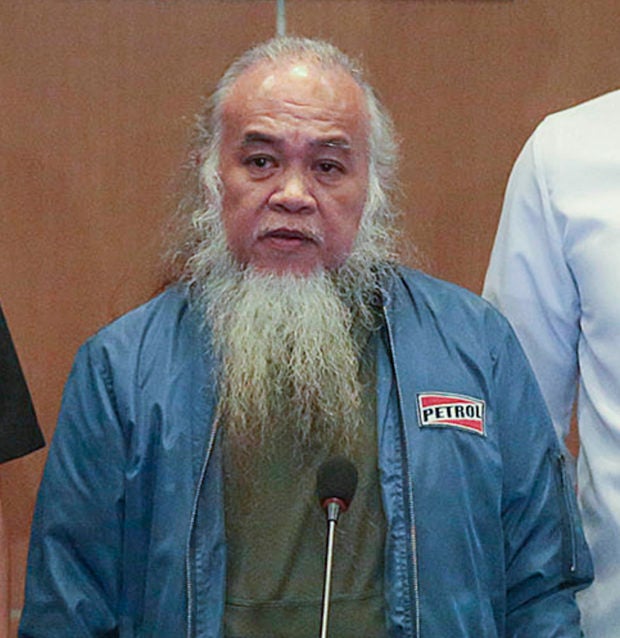 Catholic priest Teresito “Chito” Soganub told the bishop of Marawi on Monday that he and another hostage escaped from their Islamic State (IS)-inspired captors during heavy fighting with government forces, and were found and rescued by troops on Saturday.

President Rodrigo Duterte told reporters on Monday that the military rescued Soganub in a special operation that also led to the rescue of another hostage, Dansalan College teacher Lordbin Noblesa Acopio.

But Marawi Bishop Edwin de la Peña told reporters on Tuesday that he was able to talk to Soganub by phone on Monday morning while the vicar general of Marawi was on his way to Manila from Cagayan de Oro.

De la Peña said Soganub related to him “the facts of his escape” at past midnight of Sept. 17 near the Bato Ali mosque in Marawi.

“He said he escaped together with another hostage, a teacher from Dansalan College. They were fleeing an area of the Maute group, the military saw them, they were recognized and were rescued,” De la Peña said.

“That was all we talked about. I told him, ‘I don’t want to pressure you too much, I have all the time to talk to you,’”  De la Peña said.

The bishop added: “You can always combine escape and rescue.”

The bishop said he was able to talk to Soganub after Col. Romeo Brawner, commander of Joint Task Force Marawi who was accompanying the priest to Manila, called him on his cell phone.

Soganub and Acopio were first reported to have escaped during fierce fighting between government troops and the terrorists near the Bato Ali mosque in Marawi City late on Saturday.

According to the military, they spotted the two captives and rescued them.

Soganub was one of dozens of civilians abducted by hundreds of gunmen from the Maute and Abu Sayyaf terror groups who rampaged across Marawi and laid siege to the city on May 23.

Mr. Duterte on Monday dismissed suggestions that the priest was released after back-channel talks with the terrorists.

He said Soganub was “liberated through a special operation.”

As to claims that the priest was forced to convert to Islam during his captivity, De la Peña said Soganub remained a Catholic priest to the Church.

“We do not have any confirmation about that and there is no compulsion in religion if there’s something like that … It is within the context of the war in Marawi,” he said.

He remains a Catholic priest

“It doesn’t have any significance, it doesn’t mean anything to us. He remains a Catholic priest,” he added.

The claim that Soganub had converted to Islam came from Autonomous Region in Muslim Mindanao Assemblyman Zia Alonto Adiong.

Adiong said Soganub was forced to convert by his captors.

But even if it was true that Soganub had been forced to convert to Islam, De la Peña said “there is no substance to it if you are under duress.”

The prelate added that one must put oneself in Soganub’s position, because “it could be difficult to decide one way or the other when you are forced.”

“You can’t consider that. There’s no substance to it if you’re under duress. You can’t give your full consent. That is what religion is all about. Whatever it is, true or not, it doesn’t hold any water,” he said.

The prelate said Soganub, the vicar general of Marawi, remained under the Church’s care.

“At any moment we have not abandoned him. We continue to pray for him,” he said.

Asked if he was aware of any talks or payment for the release of Soganub, De la Peña said he hadn’t heard anything of the sort.

He said the Church was not fully happy despite Soganub’s escape because there were still many hostages held by the terrorists and thousands of people  displaced by the fighting remained in evacuation centers.

“We are hopeful that his (Soganub’s) release is just the first step, and will be followed by the rescue of the other hostages, many of them women. We are hopeful that soon the war will be over and that the Maranaos can begin to go back home, rebuild their lives and rehabilitate their city,” De la Peña said.