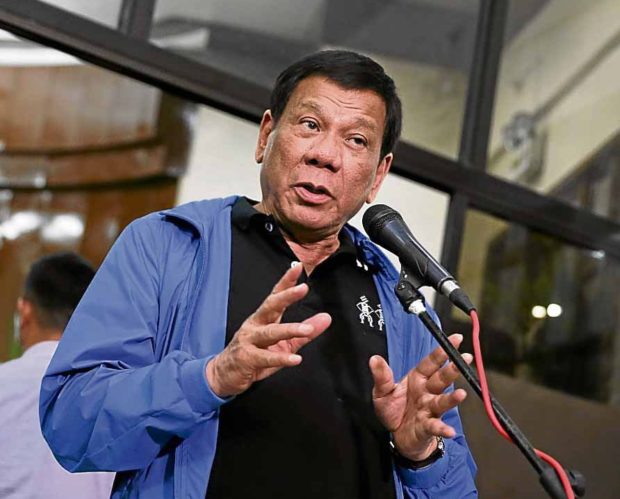 ‘STOP DARING ME’ Reacting to Sen. Antonio Trillanes IV’s claim that he has billions in secret
bank deposits, President Duterte says the senator should look for the evidence himself and not
dare him to sign waivers. The President spoke to journalists after visiting the wake of fallen
soldiers at Libingan ng mga Bayani in Fort Bonifacio late Tuesday. —MALACAÑANG PHOTO

President Duterte will not take Sen. Antonio Trillanes IV’s dare to sign a waiver on his bank accounts to disprove the latter’s allegations that he kept large sums of undeclared money.

“It’s like this. If Trillanes wants to find something of fault with me, tell him, ‘Go somewhere else and fly a kite,’” the President told reporters late Tuesday when he was asked about the senator’s challenge.

“In the same manner that if he wants to get evidence, do not get it from my mouth. You must be stupid, even if it is true or false. Why would I give you the pleasure?” he added.

The President said Trillanes should look for the evidence himself.

Since the election campaign last year, Trillanes has been accusing the President of having billions of pesos in secret bank accounts.

In February, the senator raised the issue again, saying the President had not yet revealed details of the more than P2 billion he kept in bank accounts when he was serving as mayor of Davao City.

The senator denied the charge and signed about a dozen waivers for authorities to look into the supposed bank accounts. He demanded Mr. Duterte do the same.

The President said he had already issued a waiver concerning his bank accounts. He was apparently referring to the special power of attorney (SPA) he issued in May last year to his legal counsel, Salvador Panelo, which allowed the lawyer to get a certification from Bank of Philippine Islands that at no time had there been P211 million deposited there, whether singly, collectively or cumulatively.

The SPA does not provide for the release of other details of the accounts’ transaction history.

On Tuesday, Mr. Duterte played down Trillanes’ signing of waivers on his 12 supposed foreign bank accounts, saying these were useless because the senator had a Chinese cosignatory.

Without the cosignatory’s consent, the banks will not provide details, the President said.

“You know, Trillanes thinks that really, people are ignorant. In all of his joint accounts, he has a Chinese partner. So even if he signs a waiver, if the cosigner does not, nothing will happen. And the bank will never, never name who is the partner,” he said.

Trillanes disputed Mr. Duterte’s claims that the bank waivers he issued were useless, citing several provisions in the revised implementing rules and regulations (IRR) of the Anti-Money Laundering Act of 2001.

Based on the IRR, the power of the Anti-Money Laundering Council (AMLC) covers the immediate family members, close relationship and associations reputedly known to have “joint beneficial ownership of a legal entity or a legal arrangement” with the “politically exposed persons,” said Trillanes in a press briefing on Wednesday.

The senator reiterated his challenge to the President to sign a waiver. “He’s making a lot of excuses. He should just sign a waiver so we’ll see the truth.”

Mr. Duterte said he got his information on Trillanes’ alleged accounts from a “foreign government.”

The senator, he charged, deposited amounts that were lower than the threshold that would raise red flags.

“He’s the one lying. He knows what he’s doing. He has perfected the art of crime,” Mr. Duterte said.

The President also defended Senate witnesses’ invocation of their right against self-incrimination. Invoking such right should not be taken to mean an admission of wrongdoing, he said.

“When I say, ‘I will not answer you because my answer might incriminate me,’ … do not find fault with me. If you want [something], don’t get it from my mouth. And you cannot draw an inference when I invoke a constitutional right,” he said.

The President’s son, Davao City Vice Mayor Paolo Duterte, invoked his right against self-incrimination when Trillanes questioned him about his bank accounts during a Senate hearing on drug smuggling last week.

Trillanes has accused the younger Duterte of involvement in a Chinese drug and crime syndicate and of having millions of pesos in his bank accounts.

The vice mayor denied the senator’s allegations. —With a report from AP