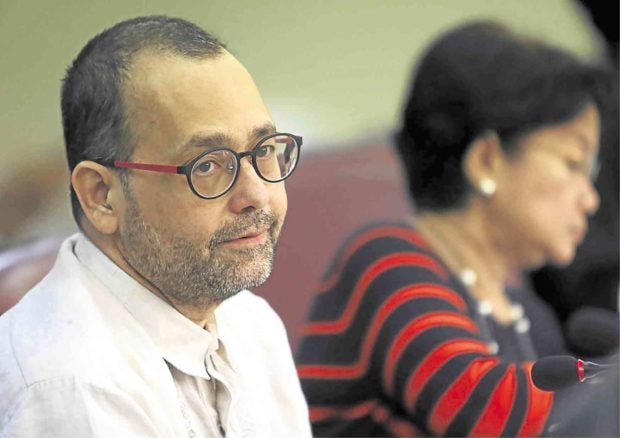 Senators on Wednesday vowed to restore the P678-million proposed budget of the Commission on Human Rights (CHR), which the House of Representatives slashed to just P1,000 on Tuesday to scuttle the agency for criticizing President Rodrigo Duterte’s bloody war on drugs.

Mr. Duterte frowned on the House move but blamed CHR Chair Jose Luis Martin Gascon for what the President said was his partiality for the “yellows,” a reference to the Liberal Party (LP), the country’s main opposition group.

“He had it coming,” the President said on Wednesday. “It’s because Gascon is really proyellow. He opens his mouth in a most inappropriate way and he conducts the business of being CHR. He doesn’t know anything.”

Mr. Duterte acknowledged that the CHR “is really an organ of government and a constitutional body” and said he did not intend to bring down institutions.

“Maybe someday, we might review their decision,” he said, referring to the House action. “As for myself, I am not. I’m not here to destroy institutions.”

Senate President Pro Tempore Ralph Recto gave assurance that the chamber would restore the CHR’s 2018 budget as proposed by the Department of Budget and Management.

“It may even need more resources considering the number of extrajudicial killings,” Recto said, referring to the rising number of killings in Mr. Duterte’s war on drugs.

“We will not allow this to pass in the Senate even if this means the 2018 budget will not be passed,” said Sen. Francis Pangilinan, the LP president.

“This leads us on a direct path to dictatorship,” he added.

Senate to stand its ground

Independent Sen. Panfilo Lacson, vice chair of the finance committee and sponsor of the CHR’s proposed budget for 2018, said late Tuesday that the Senate would stand its ground.

“I happen to be the sponsor of the CHR budget in the Senate, along with a few other agencies like the [Department of National Defense, Autonomous Region in Muslim Mindanao], etc. I accept the challenge,” Lacson said in a post on Twitter.

He asked why the House version of the budget stayed at P3.8 trillion even after the CHR budget had been cut down to P1,000. “It’s interesting to find out [what happened to the P678 million],” he said.

Senate Minority Leader Franklin Drilon promised that the LP would support Lacson in fighting for the CHR’s budget.

As of Wednesday afternoon, 21 senators had pledged to block the House move to scuttle the CHR.

In recent weeks, Speaker Pantaleon Alvarez, Mr. Duterte’s right-hand man in the House, had been threatening to gut the CHR’s budget for criticizing the killings in the President’s war on drugs.

The CHR is investigating some of the deaths of at least 3,800 drug suspects killed by police in what they have described as “legitimate” operations.

The UN special rapporteur on summary executions, Agnes Callamard, said late on Tuesday that the CHR “is a crucial institution for the Philippines for human rights protection, the rule of law, accountability.”

“It cannot deliver on its mandate without an appropriate budget, particularly at a time when it is confronted with allegations of massive human rights violations throughout the country, and including, but not only, in the context of the ill-advised, destructive war on drugs,” Callamard said.

Phelim Kine, deputy Asia director of New York-based Human Rights Watch, on Wednesday said the House action was “part of the Duterte administration’s attempt to prevent independent institutions to check its abuses, particularly in the context of the brutal drug war that has claimed the lives of thousands, including dozens of children.”

Balanga Bishop Ruperto Santos said the House action gave “the wrong message that their priority is not to value, not promote and not to preserve human life.”

Manila Auxiliary Bishop Broderick Pabillo slammed the congressional decision, saying “there is no true government by the people if people’s rights are not safeguarded.”

The Movement Against Tyranny said the House decision showed that the Duterte administration would “not tolerate even a modicum of accountability for its horrible human rights record.”

Bishop Modesto Villasanta of the United Church of Christ in the Philippines in Surigao del Sur province said the House decision reflected the “bad politics in our country.”

Agusan del Sur Board Member Santiago Cane Jr. said the House attempt to abolish the CHR was an assault on the Constitution “by the very people who took their oath to protect and preserve it. —With reports from Tina G. Santos, Chris Panganiban, Julie S. Alipala and AFP