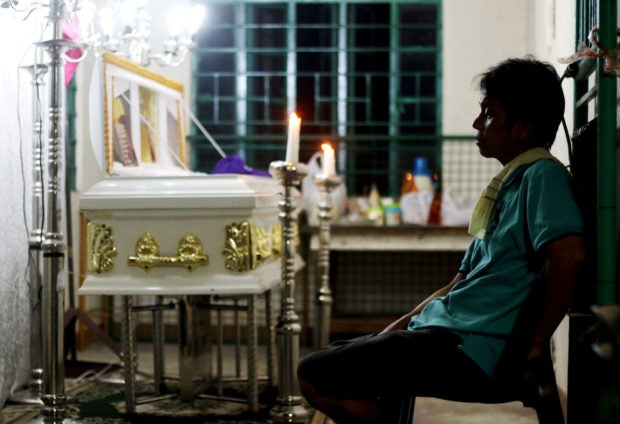 LONG NIGHT A grieving Eduardo Gabriel holds a silent vigil on the first night of the wake of his son Reynaldo “Kulot” de Guzman at the mortuary of the Barangay Hall of San Andres in Cainta, Rizal. The body of the 14-year-old De Guzman was thrown into the river in Gapan, Nueva Ecija. —RICHARD REYES

The parents of Reynaldo “Kulot” de Guzman will bury him on Wednesday despite the finding of the police DNA test that the boy whose death they are mourning is not their son, the Public Attorney’s Office (PAO) said on Tuesday.

The boy’s father, Eduardo Gabriel, said the burial would be held after a Mass to be celebrated at 8 a.m. at San Antonio Abad Parish Church in Maybunga, Pasig City.

“The negative DNA test does not have an effect since they already have a certification from the National Bureau of Investigation [that the body was De Guzman’s],” Acosta said in a text message to the Inquirer.

Acosta saw no need for the police DNA test, saying there was “no dispute [over] the identity of the [body].”

She said the parents would not turn over the body to the police, as they had NBI certification that the body was that of their son.

Asked if the police had power to stop the burial, Acosta replied: “None. They don’t own Reynaldo.”

De Guzman, 14, was the last known companion of Carl Angelo Arnaiz before the 19-year-old former University of the Philippines student was killed by police in an alleged shootout after he robbed a taxi driver in Caloocan City on Aug. 18.

De Guzman’s body was fished out of a creek in Gapan City, Nueva Ecija province, on Sept. 5. The boy had been stabbed 26 times.

Gabriel traveled to Gapan, identified the body and took it home to Cainta in Rizal province.

On Monday, however, the Philippine National Police announced that a DNA test requested by the Gapan police showed the body was not De Guzman’s.

Gabriel demanded a second test but later changed his mind, saying he was quite sure the body he had taken home was his son’s, as the body had marks familiar to him: warts below the knee and a scar on the neck.

His wife, Lina, said she, too, was quite sure the body in the coffin was her son’s.

Edmundo said, however, that despite those differences, he accepted that the body in the coffin was his brother’s.

Justice Secretary Vitaliano Aguirre II on Tuesday said he would order the NBI to conduct its own DNA analysis of the body and compare the results with samples from De Guzman’s parents.

“If the DNA sample from [De Guzman does] not match with those from the parents, it does not necessarily mean that the body is not their son. There could be some explanation,” Aguirre said.

Acosta said Aguirre was not aware that the NBI had autopsied the body and declared it was De Guzman.

The PNP denied it carried out the DNA test to muddle the case.

“We have no intention to muddle the case, we are making it clearer,” said Chief Supt. Dionardo Carlos, spokesperson for the PNP. “We are coming out with the truth because there are so many speculations coming out ahead of the facts.”

Referring to the PAO question about the credibility of the PNP’s DNA test, Carlos said: “Who has the mandate? The PNP Crime Laboratory has been existing for more than 70 years and they have the mandate to conduct scientific and forensic investigation. With due respect to a cogovernment institution or office, we are just doing our job.”

Carlos said information from De Guzman’s family should be considered in examining the body instead of criticizing the PNP’s DNA test.

For instance, he said, a brother of De Guzman had given the information that his brother was circumcised, but the body found in the creek was not.

As for the fast return of the results, Carlos said: “It is our mandate to investigate and if some people think that the outcome came out too quickly, it is because it is needed, very much needed, to shed light on the case.”