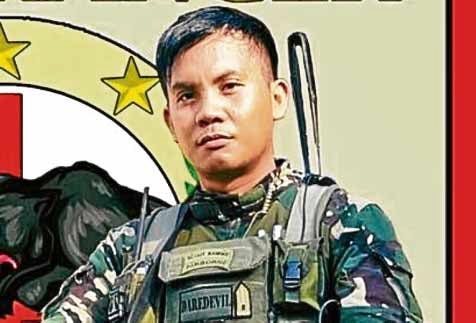 An Army captain and his buddy were the latest fatalities in the nearly four-month-old war in Marawi City, bringing to 147 the number of government troops killed in action.

Army Scout Ranger Capt. Rommel Sandoval was the company commander of the 11th Scout Ranger Company. Killed alongside him last Sunday while fighting it out with Islamic State-inspired terrorists was Pfc. Sherwin Canapi.

Sandoval, whose call sign was “Daredevil,” was the highest ranking military officer killed in the battle to retake Marawi City from the Maute-Abu Sayyaf terrorist groups.

The deaths of Sandoval and Canapi brought to 44 the number of Scout Rangers killed in the war which President Duterte said could last until December this year.

“They both died fighting,” a Facebook page dedicated to the Army Scout Rangers said in a tribute to the fallen soldiers.

Sandoval’s remains were flown to Manila on Monday afternoon. His wake is at the Libingan ng mga Bayani mortuary. President Duterte was expected to visit at 7 p.m. Tuesday, according to a Malacañang advisory.

The Scout Ranger post paid tribute to the heroism of Sandoval and Canapi who were killed while trying to save one of their company’s team leaders who was wounded and trapped in one of the buildings in the city.

“The IS still shot at the team leader even when he was already wounded. The late Rommel decided to rescue the soldier because he did not want to lose any of his men. A true leader, he and his buddy led the assault as they went down to the first floor,” the post said in Filipino.

Sandoval reached his soldier and took his pulse. But there were already a number of IS waiting for him. Sandoval was first shot on his side.

Sandoval and Canapi were able to fire back at the terrorists. But Sandoval was shot in the cheek, which was fatal.

The post did not indicate where Canapi was shot. It described Canapi as “gifted, skilled and talented.”

“He was an excellent painter. He wrote song lyrics. He also knew how to print T-shirts. He was into sports. And he can be relied on for making reports,” the post read.

The Rangers, the post said, lost one of its “skilled and talented” soldiers with the death of Canapi.