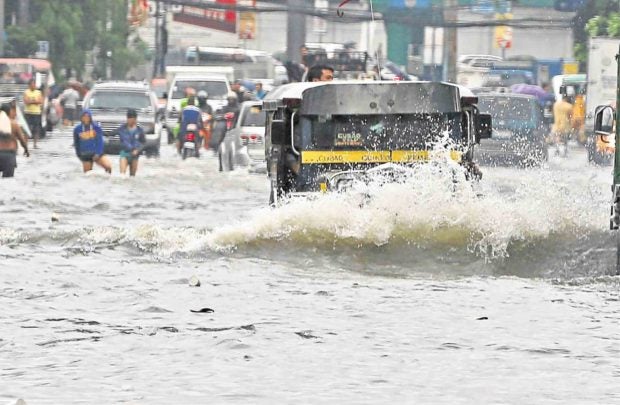 water-proof A passenger jeepney makes like an amphibious vehicle to get through a flooded portion of E. Rodriguez Sr. Avenue in Quezon City. Rains brought by Tropical Depression “Maring” lashed Metro Manila on Tuesday, leaving some areas underwater. —EDWIN BACASMAS

Despite heavy rains, a fire razed 30 houses and displaced some 60 families in Barangay Tangos, Navotas City on Monday night.

No one was killed or hurt in the five-hour blaze which destroyed around P40,000 worth of property.

The fire started at 6:11 p.m. at the corner of E. Madela and Manalaysay Streets. It was put out at 11:10 p.m. after six firetrucks from the Navotas City fire station, an ambulance and 65 volunteers rushed to the scene.

Case investigator FO1 Arbie Locahin told the Inquirer that they were looking for Omie Cruz, the owner of the house where the fire started, to determine what caused it.

Families with nowhere to go were first brought to San Roque Church in Navotas before they were transferred to Tangos Mother Elementary School, where 21 families or around 100 residents remained on Tuesday.

Leandro Serrano, City Social Welfare Department (CSWD) point person for disasters, told the Inquirer that they would try to move evacuees to Tangos 1 Elementary School where there is more space after floods brought by Tropical Depression “Maring” have subsided.

The CSWD was providing the residents with food, water, blankets and other relief goods.

Heidilyn dela Cruz, 27, told the Inquirer that residents ran outside their houses after someone shouted, “Fire!” shortly after 6 p.m. on Monday.

Dela Cruz and seven other people in her house, including three children, did not have time to bring any of their possessions with them. When they returned on Tuesday morning to survey the damage to their house, there was nothing left except for some dirty clothes.

Everything else, including two television sets, speakers, a piano and her children’s schoolbooks, had been reduced to rubble and ashes. Another resident, JP, 12, said his house and all his things were now simply “dust.”

Dela Cruz, however, said they would rebuild their house, echoing the sentiments of other families seeking shelter at Tangos Elementary School.