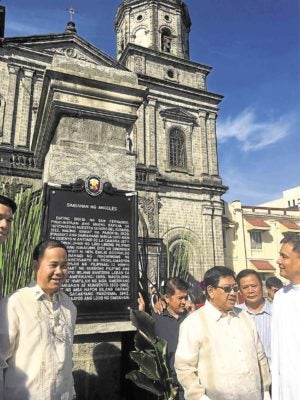 ANGELES CITY — On June 12, 1898, thousands of Filipinos celebrated the proclamation of Philippine independence from Spain at the Holy Rosary Church here, not at the Pamintuan Mansion 100 meters away as what had long been recognized in historical accounts.

The National Historical Commission of the Philippines (NHCP) has corrected the narratives by installing a government marker, which recognized the Augustinian church where a Mass was held and followed by a speech of Gen. Emilio Aguinaldo, the first president of the Philippine Republic.

Rene Escalante, NHCP chair, said the board approved the installation of the marker, written in Kapampangan and Filipino, based on published reports in La Independencia, the official publication of the Philippine revolution, and on the testimony of Gen. Venancio Concepcion.

Francis Musni, archivist of Holy Angel University’s Center for Kapampangan Studies, found the stories in the June 14 and 15, 1899, issues of La Independencia, which were edited by Gen. Antonio Luna.

Musni then asked NHCP to recognize the church, not the nearby Pamintuan mansion, as site of the first anniversary celebration. The mansion was built by Mariano Pamintuan in the 1890s as a gift to his son Florentino.

The NHCP also installed a revised marker at the mansion recently, stating that across this grand house, a military parade was held on the eve of the celebration.

The church and the mansion are separated by the Sapang Balen Creek and are situated in the city’s heritage zone declared years ago.

On June 12 next year, Freedom Day rites will be held in both sites, according to Mayor Edgardo Pamintuan. On the eve, the Philippine flag will be unfurled at the mansion which Aguinaldo used as a temporary office while preparing Tarlac as the seat of the Republic in June 1899.

The June 14, 1899, story, titled “La Fiesta Nacional (National Holiday),” and translated from Spanish to English
by Kapampangan historian Michael Pangilinan, said: “On Monday morning (of June 12, 1899), a solemn outdoor Mass was celebrated in the town of Angeles commemorating the anniversary of the proclamation of national independence.”

“Attending the solemnity was the Honorable President [General Emilio Aguinaldo] and the numerous generals, chiefs and officers of the army in operations with a large number of troops that number around 2,000 men.

“The people completely filled up the entire church courtyard where a tent awning has been suspended. After the Mass, the President took the (makeshift) place of honor and delivered to the crowd an expressive speech in commemoration of this day’s celebration.”

The celebration was larger in venue than previously thought and was not confined only at the Pamintuan mansion.

Musni said the church as venue was consistent with the First Republic’s holding of the Malolos Congress
at the Barasoain Church in Malolos town in Bulacan province.

During the marker installation, Fr. Francis Dizon, parish priest, said the struggle for freedom was not over. “Freedom is important because it gives us the freedom to work for the betterment of the many,” he said.