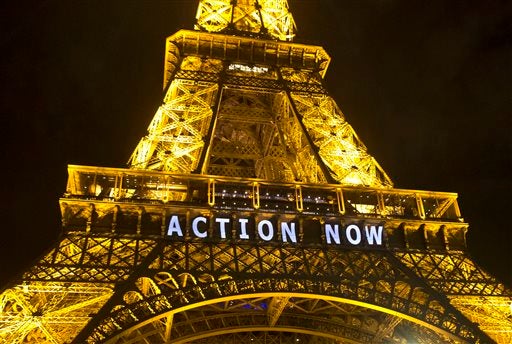 In this Dec. 6, 2015, file photo, the Eiffel Tower lights up with the slogan”Action Now”referring to the COP21, United Nations Climate Change Conference in Paris. The carbon footprint for the COP21 conference runs to thousands of tons, for the some 40,000 people, including heads of state, negotiators, activists and journalists, in Paris to hash out a ground-breaking international agreement to put a brake on global warming. (AP Photo)

Environmental ministers representing Canada, China and the European Union will co-host a meeting in Montreal later this month to move forward with the implementation of the Paris climate change agreement.

The ministerial meeting will include representatives from some 30 countries, according to Canada’s minister of environment and climate change, Catherine McKenna.

“This meeting brings together major economies and key climate actors to advance the implementation of the Paris Agreement and demonstrate continued commitment to global action on climate change,” she said in a statement.

The meeting follows US President Donald Trump’s announcement in June that the United States would abandon the painstakingly-negotiated 2015 global pact.

The accord commits signatories to efforts to reduce greenhouse gas emissions that cause global warming, which is blamed for melting ice caps and glaciers, rising sea levels and more violent weather events.

They vowed steps to keep the worldwide rise in temperatures “well below” two degrees Celsius (3.6 degrees Fahrenheit) from pre-industrial times and to “pursue efforts” to hold the increase under 1.5 degrees Celsius.

The Montreal meeting will precede an international summit slated to be held in France on December 12 to review progress on the climate accord. JPV