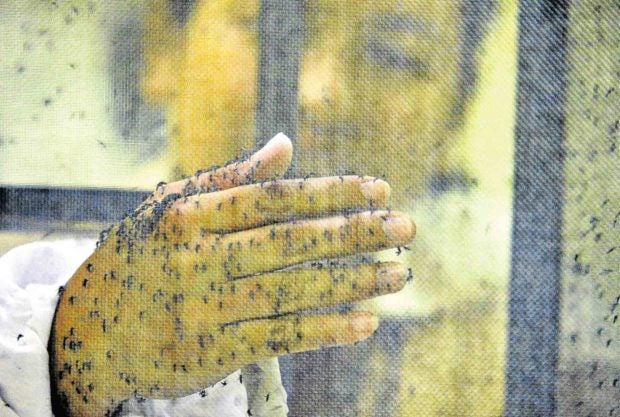 A government health personnel checks on mosquitoes collected for research at the Research Institute for Tropical Medicine in Muntinlupa City. —RICHARD REYES

A health official in Pampanga province asked the Department of Health (DOH) to issue a management protocol that would guide local governments in controlling the spread of Japanese encephalitis (JE).

In the last two weeks, the Research Institute for Tropical Medicine recorded 32 confirmed cases of JE infections in Pampanga, including a teenage girl who died in August.

But the DOH only issued an advisory about JE without a protocol for the prevention and treatment of the disease, said Dr. Marcelo Jaochico, Pampanga provincial health officer.
JE is transmitted to humans by infected Culex mosquitoes, causing abdominal pain, fever and seizures.

According to the World Health Organization, the “case-fatality” rate of JE infections could be as high as 30 percent, or three out of 10 stricken by JE could die.

“Once the DOH has issued the protocol, local governments and their respective health offices should be tasked to implement it,” Jaochico said.

“We’re still closely coordinating with the DOH and other concerned agencies like what we did during the outbreak of avian flu [in Pampanga last month],” he said.

He said the DOH had to outline a program that would establish an effective preventive measure for JE. The protocol should enumerate the proper diagnostic procedures and set up rules as to how doctors and medical workers should intervene when their patients were diagnosed with JE, he said.

“I’m still not convinced that the cases of [JE] in Pampanga have increased. Many cases were recorded because proper diagnostic measures were carried out in hospitals,” Jaochico said.

Most cases recorded in Pampanga were from the Jose B. Lingad Memorial Regional Hospital in the City of San Fernando, the capital of the province.

“Many patients diagnosed with JE from other provinces in the region were only referred to that hospital,” Jaochico said.

But he said the situation was alarming since JE had killed patients. “We have to pay attention to the mortality rate. That’s a cause for concern,” he said.

The DOH has recorded at least 57 cases of JE since January this year. Five of the patients have died.

Health Secretary Paulyn Ubial said the number was 72 percent lower than that during the same period in 2016.

While waiting for a JE protocol from DOH, Jaochico said his office had strengthened its own integrated vector control program to contain the spread of JE and other mosquito-borne diseases, such as malaria and dengue.