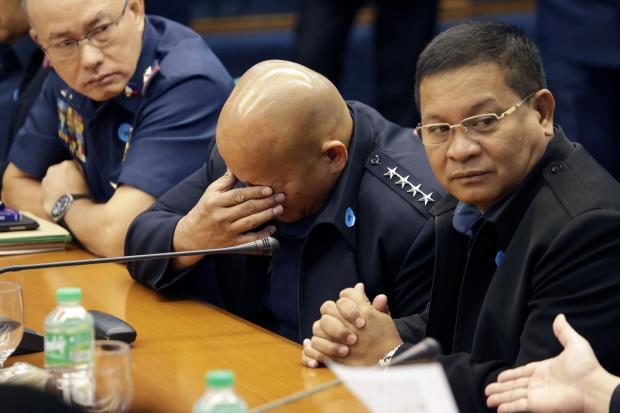 Director General Ronald dela Rosa (center), chief of the Philippine National Police, gestures before the start of a Senate investigation on Tuesday, Sept. 5, 2017, on the death of Kian Loyd delos Santos, a 17-year-old student who was killed in an alleged drug crackdown, last Aug. 16. The killing has sparked public outrage over President Rodrigo Duterte’s so-called war on drugs. (Photo by AARON FAVILA / AP)

President Rodrigo Duterte has ordered police to let journalists join raids in his crackdown on illegal drugs to disprove growing allegations of extrajudicial killings, but he warned reporters they could get shot.

Duterte issued the order in a news conference late Tuesday after a televised Senate investigation into the allegations, during which Director General Ronald dela Rosa, chief of the Philippine National Police (PNP), wept over what he said was his exasperation over unfair allegations against his men.

“Now, this is an order: Bring the media and let them go first so that they can get the story from the beginning to the end,” Duterte said, explaining that when journalists are called in when a gunbattle is over, they’ll say, “Ah, they just dumped the guns on the suspects.”

“If you get shot, will you still believe that those [suspects] have no guns? Go ahead,” the president said, adding that journalists should take positions beside law enforcers during raids on suspected drug dealers’ hideouts.

Duterte’s crackdown, which has left thousands of suspects dead and horrified human rights groups, came under renewed scrutiny after police gunned down a 17-year-old student, Kian Loyd delos Santos, during a raid in a slum in Caloocan City last month.

Police said Delos Santos was a drug dealer who fired at officers during the raid, but his family and witnesses testified in official investigations, including in the Senate, that he was shot in a dark alley as he pleaded for his life.

Witnesses pointed to evidence, including a village security video, which they said showed two police officers dragging away the teenager shortly before shots rang out and he was found fatally shot in the head, holding a pistol with his left hand although his parent said he was right-handed.

The police officers testified in the Senate that delos Santos was not the man seen being dragged in the video, although several witnesses doubted the police statement.

Murder and torture complaints have been filed against three police officers and their commander in the Aug. 16 shooting of Delos Santos.

Amid a growing outcry, Duterte has said the officers will end up in jail if they killed Delos Santos. He also met the student’s grieving parents to express his condolences.

Duterte has recently been clearer in warning officers they will face the law if they are found to have carried out extrajudicial killings. Before, he promised to defend police from lawsuits and grant them a presidential pardon if they are convicted of any crimes while fighting illegal drugs.

Delos Santos’s death was followed by another outcry over the killing of Carl Angelo Arnaiz, a 19-year-old who police said was killed when he shot it out with police after robbing a taxi driver last month.

Arnaiz’s parents say he went out with a friend to buy a snack late at night but never returned home. They found him in a morgue 10 days later, but his 14-year-old friend remains missing. Arnaiz was buried Tuesday.

Duterte has stressed his administration does not condone extrajudicial killings, although he has repeatedly threatened drug suspects with death in the past. He sounded astonished over the outcry over the deaths of delos Santos and Arnaiz.

“Two killings make it a policy of the Republic of the Philippines?” Duterte asked. “Why would we kill the innocent?” /atm