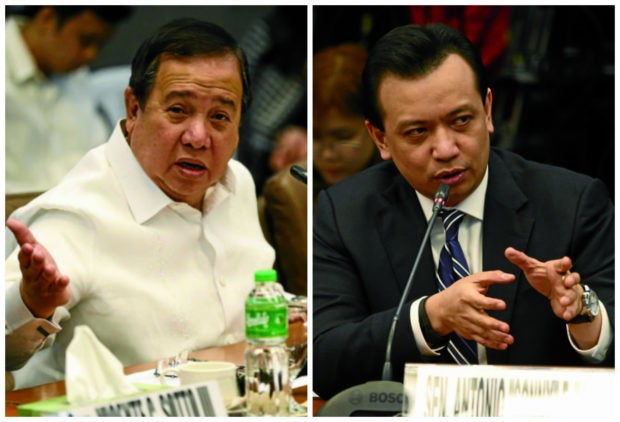 Sen. Antonio Trillanes IV said he would not only file an ethics case against Sen. Richard Gordon but he would also expose the latter’s “corrupt acts” as chairman of the Philippine Red Cross.

“Normally I’m not the whining type and could have easily let these things pass so I could focus on the more important issues at hand,” Trillanes said in a privilege speech on Tuesday. “But in the spirit of justice and fairness, at the appropriate time, I’d be filing my own ethics case against Senator Gordon for his unparliamentary and unethical acts as senator and chairman of the blue ribbon committee.”

“I will also expose his corrupt acts as chairman of the Philippines Red Cross,” he added.

Trillanes claimed that Gordon had broken some rules of parliamentary procedure – “primarily the right of the minority to be heard.”

Trillanes then cited the following rules that he said Gordon violated as chairman of the blue ribbon committee:

Disregarding the objection of a member;

Disrespected and insulted a member of the committee

“He (Gordon) mentioned ‘cockpit of chismis’ insinuating that I was just peddling rumors when clearly the information came from his resource persons,” Trillanes said. “He further insulted me by saying: ‘Huwag daw ako nagdadaldal nang hindi ko nalalaman.’ If at all, the comite de absuelto remarks are but a response to his ‘cockpit of chismis’.”

Trillanes also noted that, as in previous committee hearings, Gordon had “monopolized the flow of the proceedings by conducting a monologue for hours, thereby not giving an adequate opportunity for other senators to ask questions.”

He pointed out that only words said or actions done while in a session or hearing is on-going were covered by the Senate rules or the rules of parliamentary procedure.

Conversations made while a session or hearing is suspended or adjourned, he said, were not also covered by the rules as well as statements made in private or in the senators lounge or through media.

“Let me recall, how then Sen. Alan Cayetano called former President and then Sen. Noynoy Aquino as ‘abnormal‘ and how other senators publicly maligned former Senate President Manny Villar prior and during the 2010 elections,” Trillanes said.

“I was also once called a ‘mosquito’ by the late Sen. Joker Arroyo,” he added. “Lastly, we clearly remember how the late Sen. Miriam Defensor Santiago called a lot of senators or resource persons ‘fungus-face’ or ‘imbeciles,’ yet nobody dared to call her out.”

Trillanes maintained that he had not violated any rules when he branded as “comite de absuelto” the blue ribbon committee being headed by Gordon.

“Even in this era of kabastusan at pagmumura under the Duterte Administration, for as long as I am not cursing or using cuss words and I am not physically hurting anybody, then I am not crossing that line,” he said. “I have never crossed that line.” /idl /atm

Gordon on ethics complaint vs Trillanes: I have support of 14 senators