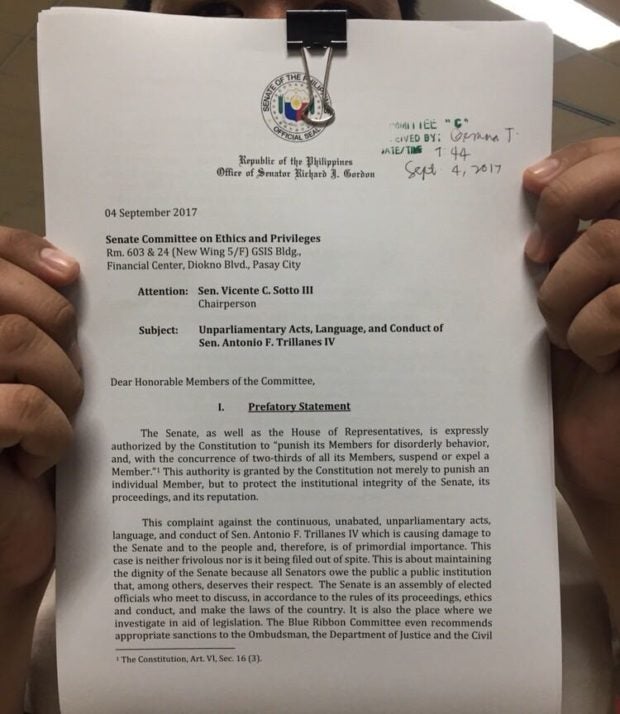 In the 23-page complaint, Gordon said Trillanes engaged in “unparliamentary acts and uttered unparliamentary language and exhibited disorderly behavior,” which is “causing damage to the Senate and to the people,” during the Aug. 31 hearing on the P6.4 billion drug shipment that went past Bureau of Customs.

The complaint was received by the Ethics committee secretary at 7:44 p.m.

“This case is neither frivolous nor is it being filed out of spite,” Gordon said.

He stressed that the Senate is “not a forum for chaos and jiggery-pokery.”

“All senators are expected to be the embodiment of competence, integrity and diligence. As members of the Senate, we are also expected to conduct ourselves in accordance with accepted and prescribed standards of behavior, and not exhibit abject ignorance of both the Rules of the Senate and proper decorum,” he wrote.

Calling the blue ribbon committee a “comite de abswelto,” according to Gordon, is a violation of the Article 358 of the Revised Penal Code for oral defamation or slander, and of the Rules of the Senate.

Also among the basis of his complaint was when Trillanes branded the Senate as “one of the most damaged institutions in the government” with most of its members afraid of going against the Duterte administration.

Earlier, Gordon said “more than 14” senators have expressed support for his ethics complaint.

But Trillanes said, it’s still too early for Gordon to assume that he has at least 14 colleagues backing his ethics complaint.

Trillanes said deliberating the complaint will be a “long process” for the Senate “so it’s premature for (Gordon) to say who among the senators would support him.”

“Eventually, it will be presented to the plenary and then it will be voted on by then malalaman natin, so it’s premature for him to say kung sino yung mga susupport sa kanya,” he said in an ambush interview at the Senate on Monday.

Trillanes also said he’s confident that he “did not do anything improper nor unparliamentary.”

Trillanes said he would readily face the complaint.

On Monday afternoon, the committee formally invited Duterte and Carpio in the next hearing on corruption allegations at Customs on Thursday, Sept. 7.

Both Duterte and Carpio have committed to attend the inquiry.