Workers get paid for stopping bird flu spread in Pampanga 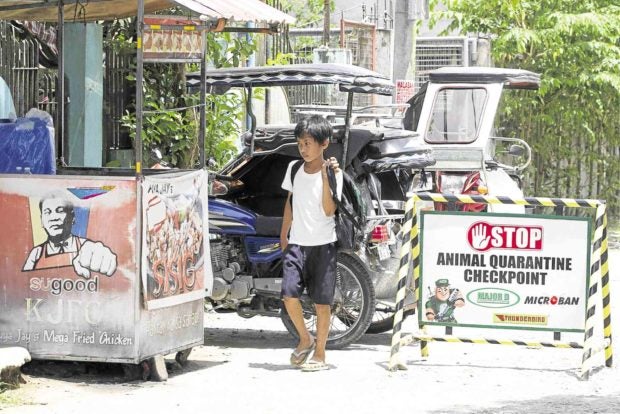 BIRD CHECK The government has set up an animal quarantine checkpoint in San Luis town, Pampanga province, after a strain of avian influenza was detected in local poultry farms. —ALEXIS CORPUZ

The workers, aged 19 to 72, are residents of San Luis and Mexico towns.

Vice Gov. Dennis Pineda handed them P750,400 for their work. Each volunteer was entitled to P700 a day killing the birds exposed to the avian flu virus. Some worked for only a day while others worked for five days.

The Bureau of Animal Industry (BAI) began culling on Aug. 12. Pineda said the provincial government hired the workers to speed up the process.

Romeo Dizon, 72, described the task as tiring although he worked for only a day. While BAI personnel gassed the birds, Dizon said he preferred wringing their necks to quicken the pace.

The workers also handled the birds, grabbing them from their coops and putting them in sacks. They threw the carcasses into soil pits dug up at the farms.

Work hours were long, starting at daybreak until late night. They tried to overcome fears that they would also get infected. They were supervised by government veterinarians and monitored by public health personnel.

Eddie Rodriguez, 48, removed the protective suit issued to him, retaining only the face mask when he worked at the farms. “It was hot. The suit slowed me down,” said Rodriguez, a native of Caramoan Island in Camarines Sur province. He said he was happy to receive P1,400 for a two-day work.

The Department of Health said none of the volunteers became sick with bird flu. It was the H5N6 strain of the virus that hit the country, according to BAI.

“Thank you for helping save the poultry industry because culling was one way to stop the spread of the virus,” Pineda said before handing the payments at a convention center here.

He said a cash-for-work project was being readied for poultry workers who would be jobless for 90 days, the period required by BAI to determine if the virus had been wiped out. The 21-day quarantine period would end on Sept. 6.

In Pangasinan, egg prices remained down despite the lifting of a ban on poultry shipments due to the bird flu outbreak, because of low sales and stocks from Southern Luzon producers that flooded the market, traders said.

Prices of eggs went down from P1,750 to P1,600 for every case of 300 eggs, said Reynaldo Ang, president of the Tarlac-Pangasinan-La Union Poultry Egg Producers Association.

The ban froze all Luzon poultry deliveries to the Visayas and Mindanao from Aug. 11 to 17 to ensure that the H5N6 strain of avian flu would be contained.

Ang said there was also an overstock of eggs in Southern Luzon provinces that were meant for the Visayas but were transported instead to Northern Luzon because of the transport ban.

“So, there was an egg glut, pushing down the prices,” he said. —WITH A REPORT FROM GABRIEL CARDINOZA