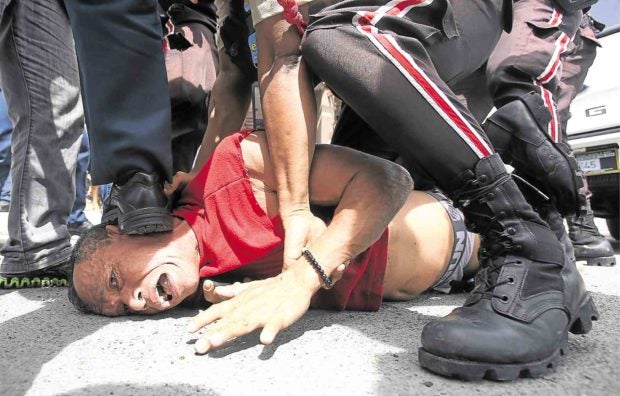 One of the residents protesting the impending demolition of their homes in Pasig City is subdued under a policeman’s boot. Twenty-eight others were arrested on Thursday for barricading the road leading to their slum community lining the banks of the Manggahan floodway. —NIÑO JESUS ORBETA

At least 30 people were wounded Thursday afternoon as violence erupted between antiriot police and residents who refused to vacate a riverbank that had been declared a danger zone in Pasig City.

Twenty-nine residents were arrested, including 13 women, after the police tore through the barricade set up on the road leading to East Bank, Barangay Sta. Lucia, where around 6,000 families face eviction from homes built along the Manggahan floodway.

Many of those arrested were wounded in the clash that also saw two firetrucks hosing down stone-throwing residents organized by the militant urban poor group Kadamay.

Around 20 policemen and firefighters sustained injuries after being pelted with rocks and bottles, according to Eastern Police District director, Chief Supt. Romulo Sapitula.

The barricade was set up on Victorio Ignacio Boulevard around 6 a.m., prompting the EPD to send an 80-member antiriot force, with SWAT teams for backup.

There were no demolition crews expected to arrive that day, but agitated residents said they had been told about a “demolition order” from City Hall, which had supposedly set a grace period from Aug. 31 and Sept. 22 for them to leave the area.

The residents demanded an on-site dialogue with Mayor Bobby Eusebio, according to the Pasig police chief, Sen. Supt. Orlando Yebra, who served as one of the negotiators.

After a 7-hour standoff and failed negotiations, the police phalanx advanced to dismantle the roadblock and took about two more hours to quell resistance, make arrests and finally secure the area.

According to Kadamay spokesperson Michael Beltran, “the declaration of the (Pasig residents’) community as a danger zone was arbitrarily done, since the area has never been flooded, even during Typhoon ‘Ondoy.’”

Kadamay national chair Gloria Arellano also argued that if the area was indeed a danger zone, then private establishments should be banned as well.

At least 6,000 families would be left homeless by the impending demolition, Arellano said.

Instead of in-city relocation, they were offered relocation sites in Calauan, Laguna province, where they would be forced to pay high amortization rates, she noted.

The Kadamay leader said the residents would continue their protests and possibly set up another barricade once the demolition starts. —WITH A REPORT FROM JHESSET O. ENANO