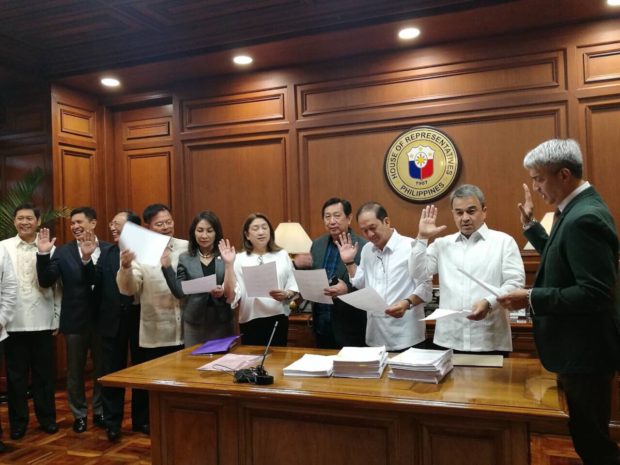 The impeachment complaint against Chief Justice Maria Lourdes Sereno was officially filed in the House of Representatives late on Wednesday after 25 lawmakers endorsed it.

Lawyer Lorenzo Gadon expressed optimism that he had built a solid case to unseat Sereno on charges of failing to disclose her real net worth, buying a luxury car with public funds and pressuring judges to defy the Duterte administration.

Sereno was not available for comment as of press time on Wednesday night.

“I believe I have a strong case when it comes to the impeachment trial in the Senate because all the grounds for impeachment here are backed up by official documents,” Gadon told reporters after filing the complaint.

A vote of one-third of the 293 members of the House is needed to send the articles of impeachment to the Senate, whose members will serve as judges in the trial.

Gadon confirmed reports that he met with Speaker Pantaleon Alvarez and other House leaders before getting the signatures he needed to file the complaint. But he said he was not authorized to discuss what happened.

Under the 1987 Constitution, an impeachment complaint may only be filed by a non-House member if it is endorsed by a House member.

In the complaint, Gadon accused Sereno of failing to declare P37 million in lawyer’s fees in her net worth, buying with public funds a brand-new Toyota Land Cruiser worth P5 million as her personal vehicle, manipulating judicial appointments and pressuring judges to defy the administration.

He cited as grounds for impeachment her alleged transgressions showing that she culpably violated the Constitution, betrayed the public trust, committed corrupt practices and other high crimes.

Sereno, according to Gadon, was untruthful when she deliberately excluded in her initial statement of assets, liabilities and net worth (SALN) the exorbitant lawyer’s fees amounting to P37 million from the Philippine government as part of a team of local private lawyers in the Philippine International Air Terminals Co. (Piatco) case.

In the case, the Philippine government was ordered to compensate Piatco for expropriating Terminal 3 of Ninoy Aquino International Airport that the company built.

At the Senate impeachment trial in 2012, then Chief Justice Renato Corona was found guilty of not declaring certain bank deposits in his SALN and was subsequently ousted.

Sereno neither declared “the amounts she received from the US law firms nor the Manila International Airport Authority, for the same purpose,” Gadon said.

Gadon also accused the Chief Justice of staying in opulent hotels when attending conferences in the Philippines and abroad, and flying on business or first class together with her staff and security.

In 2016, he said, Sereno organized an international conference in Shangri-La Boracay “and got herself billeted in the Presidential Villa, easily a P200,000-a-night room.”

She “obstructed justice by ordering Muntinlupa judges not to issue warrants of arrest” against Sen. Leila de Lima, the lawyer said.

“Sereno instructed a Supreme Court official to call the judges, to order them not to issue warrants of arrest against the accused, ‘considering she is a senator.’

“The Supreme Court official had no choice but to follow the orders of respondent Sereno and call the judges,” Gadon said.