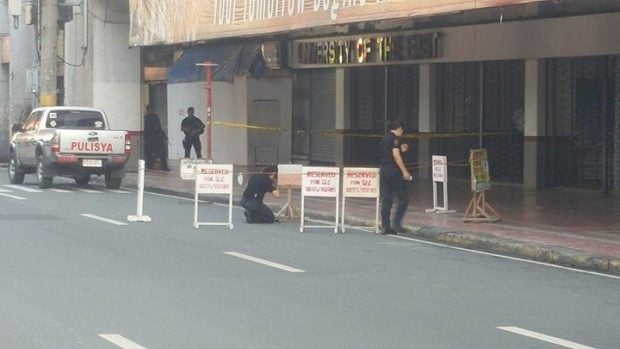 Police inspect the vicinity of the University of the East-Recto campus after a grenade was spotted outside the school Tuesday morning. ISA AVENDANO-UMALI/RADYO INQUIRER 990 AM

A grenade was found in front of the University of the East (UE) Recto, Manila on Wednesday morning, radio reports said.

The Explosive and Ordnance Division (EOD) of the Manila Police District (MPD) confirmed that the explosive was an “MK2 hand grenade.”

(It is not capable to explode without a detonator and it was lacking one. Its safety pin was still intact and it was taped.)

Santos said a street sweeper first saw the suspicious package at around 5:45 a.m. in front of the UE gate and called the attention of school’s guard who immediately reported it to the MPD.

The area, which was cordoned off while the police dealt with the incident, was cleared at around 6:45 a.m. according to Radyo Inquirer.

Authorities were still coordinating with the UE administration for the availability of a closed circuit television (CCTV) footage on the area.