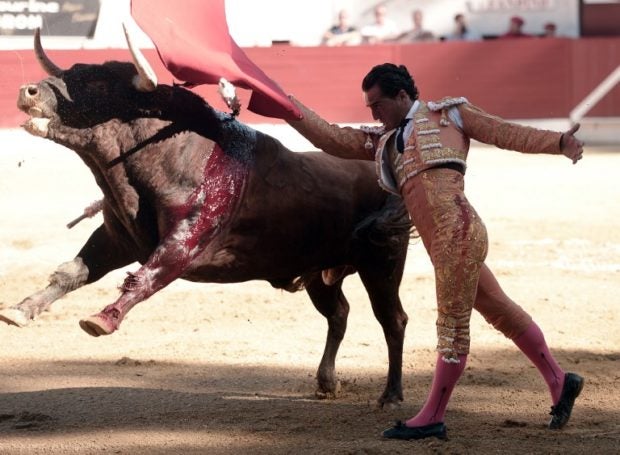 Spanish matador Ivan Fandino performs a pass with a Baltasar Iban bull during a bullfight at the Corrida des Fetes on June 17, 2017 in Aire sur Adour, southwestern France. A bull injured an anti-bullfighting activist on Sunday, August 27, 2017, after the protested jumped into a ring in Carcassone, also in southern France, while a bullfight was taking place. AFP PHOTO

CARCASSONNE, France — An anti-bullfighting activist jumped into the arena in Carcassone, southern France, on Sunday and was promptly attacked by one of the animals he wants to protect, local police said.

Two protesters, a man and a woman, were in the audience before managing to make their way into the main ring during the “novillada”, a series of fights involving young bulls.

One bull charged at the man who, according to police a received “a long but not deep” injury from its horns.

The protester, in his 30s, “was very lucky” that he was not properly gored and was only lightly injured, another source said.

He was taken to Carcassone hospital for examinations. His female companion was not injured and was arrested by police.

Earlier two other protesters had briefly hung a banner saying “Stop Bullfighting” from the ramparts of the medieval French town.

Bullfighting is banned in most of France but is allowed in some southern regions where it is protected as part of local traditions.

Defenders of bull fighting say it has huge cultural importance, embodying traditions dating back hundreds of years but its popularity has been steadily waning in recent years. CBB