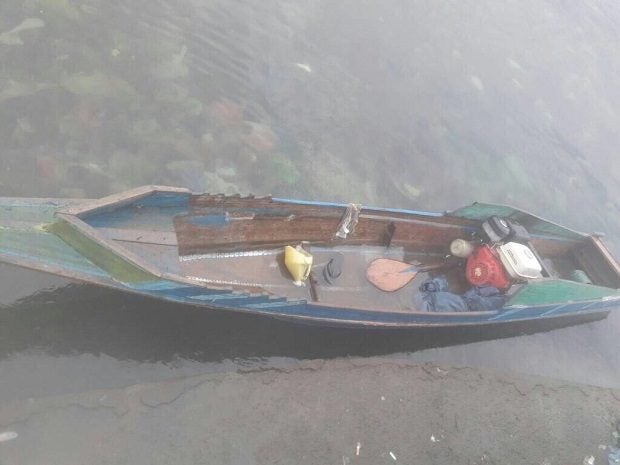 Soldiers recovered a small boat which a group of Maute terrorists reportedly tried to use to slip into the main battle area in Marawi City through Lanao Lake. Ten Maute members were reportedly killed when soldiers in boats engaged them in a gunbattle on Monday, August 28, 2017. JOINT TASK FORCE MARAWI PHOTO

Ten terrorists from the ISIS-linked Maute Group were killed by government troops as they tried to enter the main battle zone in Marawi City through Lanao Lake early Monday, the military said.

A three-hour gunbattle ensued after the terrorists aboard two motorized boats were intercepted by soldiers at about 2:30 a.m., said Cpt. Jo-Ann Petinglay of Joint Task Force Marawi.

“At 5 in the morning, upon searching the area, troops were able to recover five dead bodies of the enemy; one M16 rifle; and one motorized pump boat,” she said.

The soldiers were also able to shoot five more terrorists but their bodies were not recovered, she added.

One of the two boats sank during the pursuit.

Security forces are still searching for the boat and the five bodies, Petinglay said. CBB