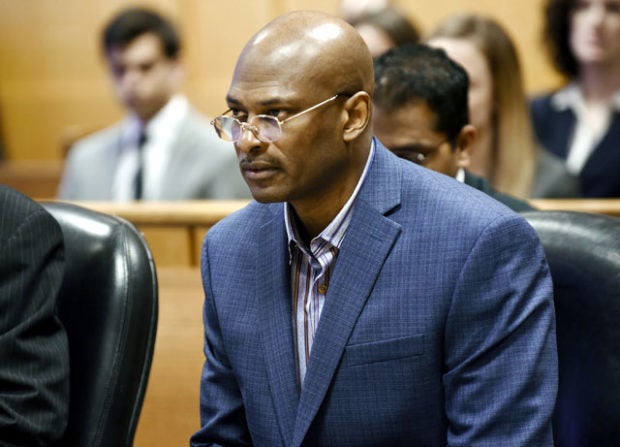 In this June 1, 2017 file photo, Desmond Ricks listens to a judge during a hearing in Detroit. Ricks, who served 25 years in prison for murder based on sham evidence, has filed a lawsuit seeking more than $100 million. Ricks was released in May after making the extraordinary claim that Detroit police framed him for a fatal shooting outside a restaurant in 1992. AP file

DETROIT — A Detroit man who served 25 years in prison for murder based on sham evidence has filed a lawsuit seeking more than $100 million, saying police deliberately framed him by switching bullets to win a conviction.

Desmond Ricks, 51, was released from prison in May after new tests supported his remarkable claim: Detroit police intentionally pinned him with a homicide in 1992.

An analysis of two bullets taken from the victim and still in police storage showed they didn’t match a gun that was presented as the murder weapon. Prosecutors agreed to drop the case. They also said the statute of limitations barred them from investigating officers involved in Ricks’ arrest.

“Since the officers cannot be put in prison, this is the only way to begin to right a horrific misconduct and the harm to our criminal justice system,” Ricks’ attorney, Wolfgang Mueller, said.

“It’s evil,” he added Thursday. “I can’t picture how a police officer who is sworn to uphold the law and be objective could go to sleep at night.”

The lawsuit, filed Wednesday in U.S. District Court, names the city of Detroit and two retired officers as defendants. Ricks’ two daughters are also plaintiffs in the case. The head of Detroit’s law department, Melvin “Butch” Hollowell, declined to comment on the lawsuit.

Ricks witnessed the fatal shooting of a friend, Gerry Bennett, outside a restaurant, but he insisted he had no role. Police arrested him a few days later and seized a gun that belonged to his mother. He was subsequently convicted of second-degree murder — and spent half of his life in prison.

“It’s hell,” Ricks said. “It’s not a good place. It’s the most abnormal environment ever created on Earth.”

The case was reopened at the request of the Innocence Clinic at University of Michigan law school. David Townshend, an expert who testified at Ricks’ trial, said bullets taken from the victim were not the ones given to him for examination back in 1992.

Townshend believes the bullets presented to him were from the gun that belonged to Ricks’ mother, not from Bennett’s body.