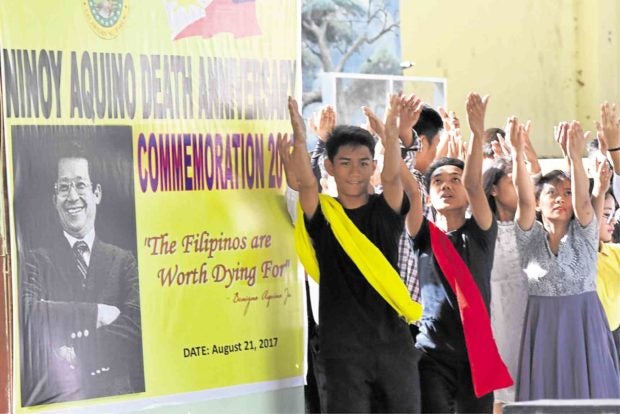 SAN MANUEL, TARLAC — Political leaders in Tarlac province would block any member of the Aquino clan who would seek any elective post in the 2019 elections, Mayor Benjamin Tesoro said here on Monday during the program commemorating the 34th anniversary of the assassination of former Sen. Benigno “Ninoy” Aquino Jr.

“Never again to [an] Aquino in public service,” Tesoro said in a speech he gave during the program.

He said it was a decision made during a meeting of the Nationalist People’s Coalition in Paniqui town in Tarlac on Saturday, in reaction to reports claiming that the late senator’s daughter, Kris, would run for Tarlac governor, and a relative, Sen. Paolo Benigno “Bam” Aquino IV, would run for president.

“Everyone who attended that meeting did not like [the Aquinos] anymore because after many years that they have been in power, nothing [beneficial] happened to Tarlac,” said Tesoro, referring to the administration of former President Benigno “Noynoy” Aquino III, the slain former senator’s son.

“If there are improvements in my town, it’s because we worked hard for these. Only Concepcion [town] benefited from Noynoy,” Tesoro said.

Concepcion, the late senator’s birth place, was more appreciative of the Aquinos during the Monday commemoration of Aquino’s assassination at the tarmac of Manila International Airport on Aug. 21, 1983.

“Yellow still means we are brave, it means we are watching,” said Emilio Martin Enciso, 16, grandson of the late Sen. Agapito “Butz” Aquino who was guest speaker there.

“I have always believed that charity starts at home. But this did not happen in Tarlac,” Tesoro said.

Tesoro also expressed his disappointment that Noynoy did not attend the town’s commemorative program for his father. He said this was the second time that he invited Noynoy to his town.

He said Ninoy Aquino was not being targeted for the shortcomings of his widow, former President Corazon Aquino, and his son, Noynoy, and other Aquinos who served the government.

“Ninoy was different. His passion to serve Tarlac, the country and the Filipino people was different. And I am personal witness to that. He had a comfortable life but he chose to sacrifice for the people,” he said.

Tesoro served as Ninoy’s youth coordinator in the Senate before he joined the Philippine Military Academy, where he graduated in 1975.

During the program, Tesoro’s daughter, Vice Mayor Cresencia Tesoro, read Noynoy’s message, which was emailed to her. Noynoy thanked the town residents for remembering his father on his death anniversary. —With a report from Maria Adelaida Calayag