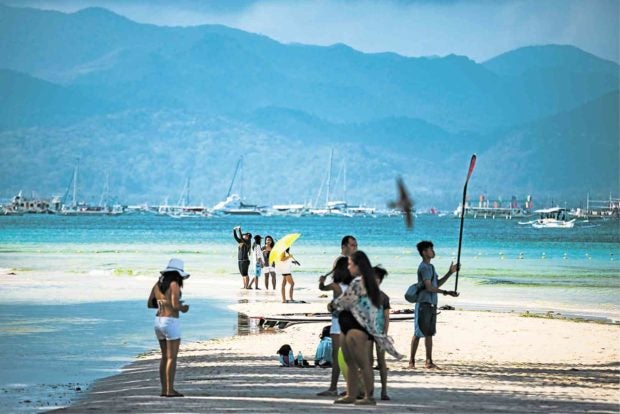 Boracay Island in Aklan province remains one of the top tourist-drawing destinations in the Philippines. —Jilson Seckler Tiu

ILOILO CITY—Occupants of at least 1,000 residential and other structures on Boracay Island sitting on timberland will be asked to leave or face criminal charges, according to the Department of Environment and Natural Resources (DENR).

The structures are built on about 400 hectares of timberland and are not covered by titles issued by a court or by Special Land Use Permits (SPLUP) and Forest Land Use Agreement for Tourism Purposes (FLAgT), according to Jim Sampulna, DENR Western Visayas executive director.

“We want to recover these illegally occupied areas so we can plant native trees,” he told the Inquirer.

Sampulna said the agency conducted an inventory of forest land on the 1,032-hectare island on the instruction of Environment Secretary Roy Cimatu.

Cimatu earlier announced that addressing the environmental concerns and problems of the island would be among his priorities.

Consultations and discussions would be held with the occupants who would be asked to leave the area unless they could avail of a SPLUP or FLAgT.

“Secretary (Cimatu) wants to resolve this as soon as possible but we can assure them that this will be done through a democratic process,” Sampulna said.

Presidential Proclamation No. 1064, issued by then President Gloria Macapagal-Arroyo on May 22, 2006, categorized 628.96 ha or 60.94 percent of the island as alienable and disposable, and the rest as forest land and protected areas.

Only about a third of the island (292 ha), belonging to the heirs of Ciriaco Tirol, are titled, according to the DENR.

Most land claimants on the island pay tax declarations, many for more than 30 years, as proof of ownership or rights over properties.

Sampulna said the DENR had identified possible areas in the Aklan mainland for those who would vacate their occupied areas in Boracay.

He said those who would refuse to leave might face charges of illegal occupation.

Sampulna earlier recommended to the agency’s central office to order the resumption of titling of Boracay land categorized as alienable and disposable.

But under the country’s land ownership laws, land claimants over public lands will have to wait for 30 years after the land is declared alienable and disposable before they can apply for titles. That would mean 30 years after the issuance of PP 1064 or in 2036.

Environmentalists and conservationists have repeatedly called on government agencies and officials to protect the remaining forest land on the island which has been suffering from environmental degradation due to decades of unregulated development and tourism activities.