Trillanes slams PNP on claim Kian was a drug courier 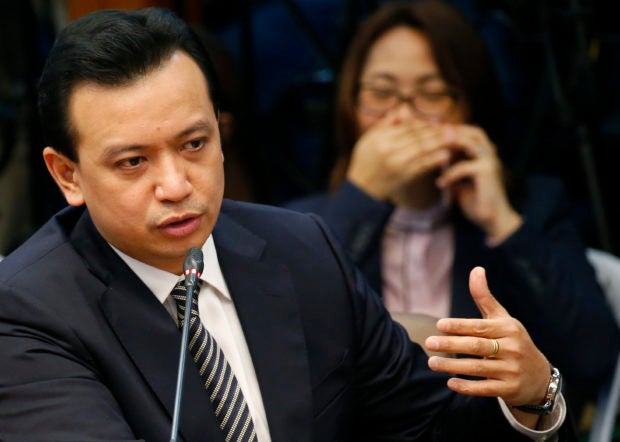 Opposition Sen. Antonio “Sonny” Trillanes IV on Monday slammed the Philippine National Police (PNP) for saying that Kian de los Santos, the Grade 11 student killed by law enforcers in an illegal drugs operation, was a drug courier of his father and uncles.

“You already killed him, and you would still besmirch his name? That is how evil these people are. To them everything is propaganda,” Trillanes told reporters in Filipino.

Trillanes said the CCTV clip clearly showed that de los Santos, 17, was being dragged before he was shot dead.

“He did not fight back. That is the issue. Whatever was the circumstances that led to his death, this is a clear case of summary execution,” Trillanes said.

Aquino supported an investigation into Delos Santos’s death but hoped this would not “drag for too long” that it would end up muddling the case.

Aquino, who was a senator before he became president, said he already had questions he would likely ask if he were at a Senate investigation.

Trillanes said that the Senate majority’s move to investigate the deaths from the administration’s war against illegal drugs was a signal to President Rodrigo Duterte that he has lost control over the Senate.

“The message of the majority (senators’) statement, including the minority, is that he has lost the Senate,” Trillanes said. “If initially there was a perception that he controls the Senate, this time it is clear that he no longer has control.”

Trillanes, a fierce critic of Duterte, joined the mass commemorating the 34th death anniversary of the martyred Sen. Benigno “Ninoy” Aquino Jr. at the Manila Memorial Park in Parañaque City.

Trillanes’s fellow minority senators – Francis “Kiko” Pangilinan, Franklin Drilon, and Bam Aquino, a cousin of the former president – were also present at the mass which was attended by over a hundred supporters. Most of them came in yellow, the color of the opposition during the Marcos dictatorship.

Pangilinan said the move of the Senate majority was a “signal to all our fellow senators that we have to be independent” and serve as a “check and balance” to the executive department.

Drilon, for his part, said there should be an impartial investigation by the Senate.

He said that the investigation should not be like the one conducted by the Fernando Commission, which was ordered by Ferdinand Marcos to look into the killing of Ninoy Aquino, but it was eventually abolished “because of bias.”

Trillanes said the Senate majority’s resolution to look into the killings only showed that “they cannot pretend anymore that these things are not happening.”

“They cannot look the other way. They can see the people’s anger. These probably pushed them to do what they are doing now,” Trillanes said.

He maintained his belief that the killings were state-sponsored, precisely because “the policy statements of President Duterte are clear.”

“You have to be monumentally stupid not to realize that this is not state-sponsored… His order was to kill. If they (drug suspects) have no gun, give them a gun,” Trillanes said. /atm