Faeldon in standoff with Trillanes before admitting corruption in BOC

Bureau of Customs (BOC) commissioner Nicanor Faeldon refused to answer questions from Senator Antonio Trillanes IV on whether there is corruption in the embattled agency.

Faeldon broke down in tears as he spoke with Senate blue ribbon committee chairman Senator Richard Gordon after the latter called for a recess.

Gordon’s committee on Tuesday resumed the inquiry on the Customs’ failure to prevent the P6.4-billion shipment of “shabu” (methamphetamine hydrochloride) from China from entering the country.

First of the senators to interpellate, Trillanes asked Faeldon, “Is there corruption in the Customs?”

Faeldon, who, like Trillanes is a former soldier, said he will not answer the senator, saying he does not want to further justify the “preposterous stories” the senator was spreading.

“In the past weeks, he peddled preposterous stories. It’s pointless for me to answer these questions… I’m already guilty of his accusations so it’s baseless to answer him,” Faeldon said.

Trillanes earlier said Faeldon was “at the heart” of the BOC controversy. But in the hearing, he clarified that he did not to accuse Faeldon was the center of the smuggling activities in the agency.

READ: Trillanes: Faeldon ‘at the heart’ of shabu smuggling controversy

The senator told Faeldon: “I’m asking you as a member of the committee. These are not accusations. Tinatanong kita, meron bang corrupt sa Customs o wala (I am asking you, is there corruption in Customs or none) or I’ll be forced to move you for contempt.”

Gordon then intervened and appealed to Faeldon to answer Trillanes’ questions.

Faeldon didn’t budge and said it was his duty to protect the innocent Customs employees and their families who were being dragged into the controversy. 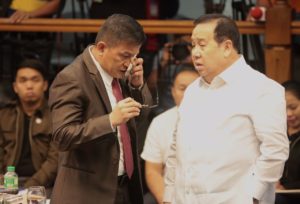 Customs commissioner Nicanor Faeldon wipes his eyes of tears as Sen. Richard Gordon approach to talk to him at the resumption of the Senate hearing on the 6.4 billion drug shipment which the BOC confiscated. INQUIRER/Grig C. Montegrande

Gordon then called for a recess and was seen speaking to an emotional Faeldon.

Later when the hearing resumed, Trillanes repeated the question on whether corruption happens in the agency. Faeldon finally answered, “Yes.” IDL