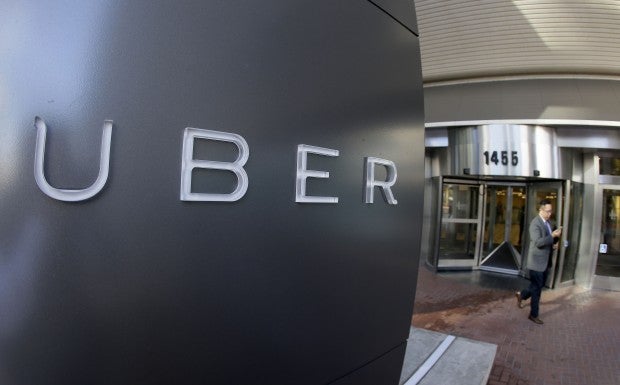 In this Tuesday, Dec. 16, 2014 file photo, a man leaves the headquarters of Uber in San Francisco. Drivers for Uber and other companies most often are considered independent contractors who are self-employed. Rather than receive a W-2, theyll get a 1099 form reporting their income. AP

After being slapped with a one-month suspension by the Land Transportation and Franchising and Regulatory Board (LTFRB), Uber Philippines announced that it was temporarily stopping its operations starting Tuesday.

“Effective 6:00 a.m. of Tuesday, August 15, Uber will suspend its operations in compliance with an LTFRB order last night,” Uber Philippines said in a statement posted on their social media accounts.

The transport network company (TNC) also apologized to the riding public and assured them that it would ask for reconsideration from the LTFRB.

“We apologize to our riding public for this inconvenience. We will do our best to resolve this quickly,” Uber Philippines said. “We will ask for a reconsideration and have the order lifted or the one-month suspension shortened.”

“We are deeply committed to serving our riders and drivers partners, and are doing everything we can to resolve this situation at the soonest possible time,” the TNC added.

The LTFRB, in its cease-and-desist order that was released and took effect Monday night, said that Uber was “irresponsible” when it continued to accept and activate new drivers into its platform despite the July 26 order against it.

“The objective of the board now is to strike a gentle balance between innovation and the law for the public good… What takes precedence then? No doubt, it is the law. The law which defines fair and suitable regulation is the great equalizer in addressing and fulfilling the common good,” the LTFRB order said. CBB