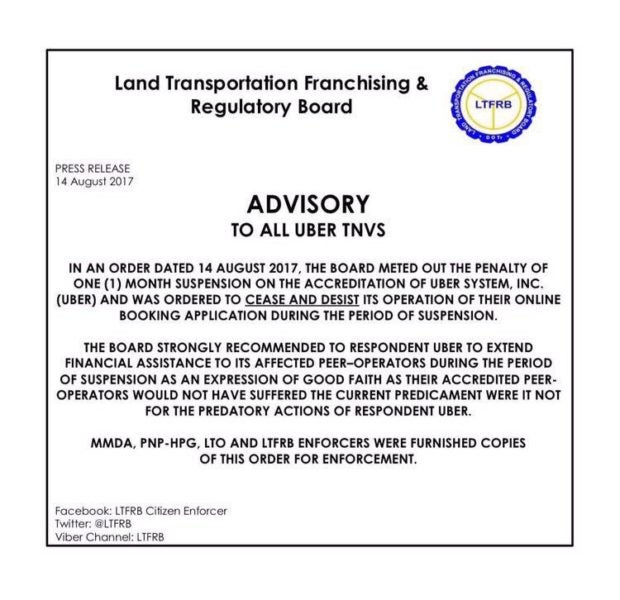 The Land Transportation Franchising and Regulatory Board (LTFRB) has suspended for a month the operations of transport network company (TNC) Uber after it defied its July 26 order not to accept and activate new drivers into its platform.

In response, Uber issued a short statement, saying: “Uber received an order around 6 p.m. tonight (August 14) to completely stop operations. We are studying the order at the moment. We will update our riders and drivers as soon as we can.”

In its cease-and-desist order that was released and took effect on Monday night, the LTFRB said that Uber was “irresponsible” when it continued to accept and activate new drivers into its platform.

“The objective of the board now is to strike a gentle balance between innovation and the law for the public good… What takes precedence then? No doubt, it is the law. The law which defines fair and suitable regulation is the great equalizer in addressing and fulfilling the common good,” the order read.

Recognizing that their order meant that thousands of Uber’s drivers would lose income for a month, the LTFRB recommended that Uber extend financial assistance to its affected drivers as a “form of good faith.”

“[T]heir accredited peer-operators would not have suffered the current predicament were it not for the predatory actions of [Uber],” it said.

On July 26, the LTFRB ordered TNCs Grab and Uber to stop their acceptance and accreditation of new drivers as the agency ironed out issues concerning the ride-sharing industry.

However, the LTFRB found out that Uber defied its order, with the TNC even releasing a statement that partly read that “applications are being accepted but not processed” by them. On top of this, the LTFRB was also able to activate three of its cars into Uber’s platform.

In its hearing early this month, the LTFRB maintained that it was clear in its order that no applications should be received by the TNCs to “avoid raising false expectations” among drivers that they may engage in the public transportation service.

During the recent congressional hearing on the ride-sharing industry, Uber said that it has to date accredited around 66,000 vehicles into its platform.

The board said that it recognized that the service provided by TNCs to the commuting public was “undeniably positive and beneficial.’

It noted though that “technological innovation is but a tool to enhance human convenience but may not dictate what may be morally acceptable social human behavior.” /atm