Espinosa may be used as witness vs Peter Lim — Aguirre 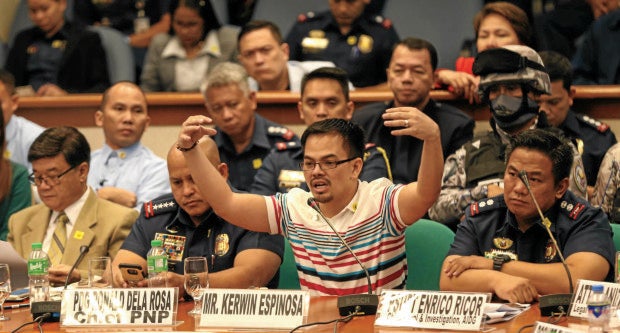 Suspected drug lord Kerwin Espinosa describes the positions of the CCTV that recorded the time drug money was being exchanged between his father Mayor Rolando R. Espinosa and police officers during the second Senate inquiry and investigation on the killing of Espinosa Sr. INQUIRER PHOTO/LYN RILLON

Self-confessed drug trafficker Roland “Kerwin” Espinosa may be used as a witness against alleged drug lord Peter Lim and the other respondents in the criminal case pending before the Department of Justice (DOJ), Justice Secretary Vitaliano Aguirre said Thursday.

“The inclusion of Kerwin Espinosa in the criminal case, in the drug offense, can be discharged before the actual trial or even during the trial of the case. It is procedural in nature that he should be charged first and be discharged later as a state witness,” Aguirre told reporters in a chance interview.

The DOJ Chief, however said it will be up to the handling prosecutors of the case to decide once they have reviewed the evidence.

He said he could not say yet what testimony of Espinosa is of value to the prosecution.

“I just would like to say that I don’t want to go and state my definite decision on this because I might be the one to be called to make the final judgment. I’d better not answer that,’ he added.

The DOJ assigned Assistant State Prosecutors John Michael Humarang and Aristotle Reyes to handle the preliminary probe of the case for violation of Section 26 (b) of Republic Act 9165 or the Comprehensive Dangerous Drugs Act.

The said offense pertained to the “sale, trading, administration, dispensation, delivery, distribution and transportation of dangerous drugs and/or controlled precursors and essential chemicals.”

The complaint filed by the Philippine National Police-Criminal Investigation and Detection Group tagged Lim as the alleged supplier of illegal drugs to the group of Espinosa. JE