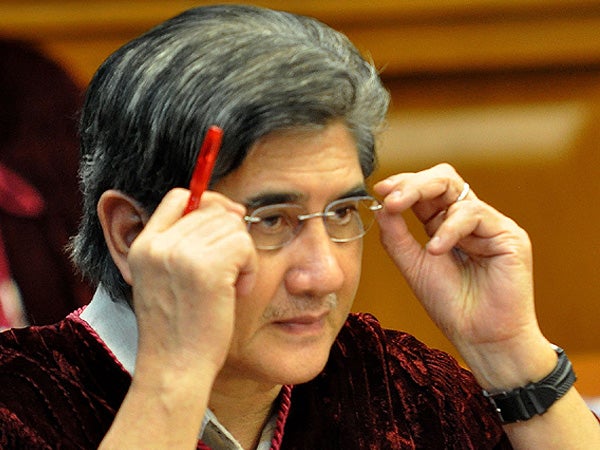 (2nd update, 3:44 p.m.) The Sandiganbayan Second Division has ordered the arrest of Senator Gringo Honasan for graft over the alleged anomalous use of his P30 million Priority Development Assistance Funds (PDAF) in 2012.

In the resolution, the anti-graft court found probable cause to hold Honasan on trial and thus ordered his arrest for graft.

Graft is a bailable offense. The bail is set at P30,000 for each count.

“After perusing the information… as well as the supporting evidence… the Court finds that there is sufficient probable cause to hold the accused in this case for trial and issue a warrant of arrest against them,” the court said in its resolution.

Ombudsman prosecutors filed two graft informations against Honasan for violations of Section 3(e) of the Anti-Graft and Corrupt Practices Act.

Honasan is the fourth senator to be charged over alleged anomalies involving lawmakers’ use of their pork barrel funds or PDAF, which was abolished by the Supreme Court at the height of public outcry over the Janet Lim-Napoles-masterminded pork barrel scam.

Honasan’s graft indictment involved the funds he coursed through the NCMF as implementing agency and was intended to finance small and medium enterprise/livelihood projects for Muslim Filipinos in communities in the National Capital Region and Zambales.

The Ombudsman noted that Honasan’s PDAF was disbursed without complying with the procurement regulations.

Ombudsman prosecutors said Honasan endorsed Focus to implement his PDAF without the benefit of a public bidding in violation of procurement rules, in spite of the absence of the appropriation law or ordinance allowing negotiated procurement.

The NCMF officials were charged for releasing Honasan’s PDAF to Focus “with unusual accommodation and haste.”

“The above acts of the accused public officials of failing to follow the requirements of Republic Act 9184 as well as its implementing rules and regulations, GPPB Resolutions and national budget circulars show that unwarranted benefit, advantage or preference was given to private individuals  without the benefit of a fair system for determining the best possible offer for the government,” the charge sheet read.

“Focus, as endorsed by Honasan, unduly profited from the questionable transactions, to the damage and prejudice of the Republic of the Philippines,” it added.

The other senators charged for PDAF misuse are former senators Ramon Revilla Jr., Jinggoy Estrada and Juan Ponce Enrile, who were charged in 2014 with plunder and graft for allegedly pocketing kickbacks from purported ghost PDAF projects.

Revilla and Estrada have been detained in Camp Crame since 2014 for the non-bailable offense of plunder, while the elderly Enrile was allowed to post bail for humanitarian reasons. IDL