US exec: Pentagon may boost PH fight vs IS-backed groups 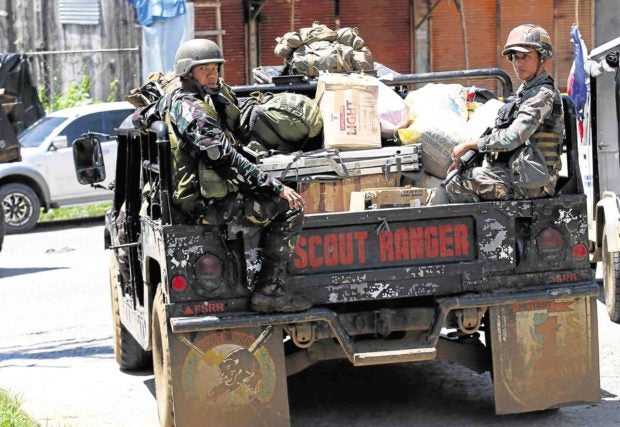 WAR ZONEA military truck carrying supplies and soldiers heads to the battle zone in Marawi City, where Islamic State-inspired militants have been fighting government troops since May. —JEOFFREY MAITEM

MARAWI CITY — Government security forces fighting Islamic State (IS)-inspired militants in this war-torn provincial capital of Lanao del Sur are confident they can stop the enemy without the help of airstrikes that the American government was reportedly offering the Philippine military.

Ground military commanders issued the statement on Wednesday amid reports that the Pentagon was considering a plan allowing the United States to conduct airstrikes against Islamist militants holed up in a section of this city since May 23.

“We are confident we can resolve the crisis as soon as possible,” said Capt. Jo-ann Petinglay, spokesperson for Joint Task Force Marawi.

Petinglay said military officials had yet to receive a formal notice or offer for such air capability deployment.

But a US defense official on Tuesday said the US was weighing additional support to the Philippine military in its fight against Islamist insurgency in Marawi.

Discussions are “pretty advanced” and will see the US provide increased surveillance drone capabilities and training for local forces, the official told Agence France-Presse (AFP) on condition of anonymity.

The drones could hypothetically be used to conduct strikes, the official added, although that would only be for self-defense reasons to protect US or partner forces, and would not signal another front in America’s drone wars.

“It’s not necessarily what those [drones] are there for. Those are there for ISR and support,” the official said, using an abbreviation for intelligence, surveillance and reconnaissance.

The Philippines’ Department of National Defense said there had been no discussion regarding the use of US drones to strike IS-inspired “terrorist groups.”

“We appreciate Pentagon’s reported desire to help the Philippines in the fight against Daesh-inspired Maute group because terrorism is a global menace that the community of nations must unite to fight against. However, such proposition, if any, has to undergo a process. And a covenant must be had between the commanders in chief of both nations,” Defense Secretary Delfin Lorenzana said in a statement.

Pentagon spokesperson Lt. Col. Chris Logan said all military assistance in the Philippines was conducted at the request of the Philippine government.

Under the existing Mutual Defense Treaty between the Philippines and US, the latter can only provide technical assistance and training, and direct military actions may only be allowed during an actual invasion of the Philippines.

US Secretary of State Rex Tillerson on Monday called the crisis in Marawi a “tragic situation” and said US forces were providing surveillance aircraft and important advice to the Philippine forces in the battle in Marawi.

Almost 700 people have been killed, according to the official count, in over two months of fighting in Marawi City. The militants, waving the black IS flag, have occupied parts of Marawi since May 23, prompting Mr. Duterte to declare martial law in Mindanao. —Jeoffrey Maitime and AFP